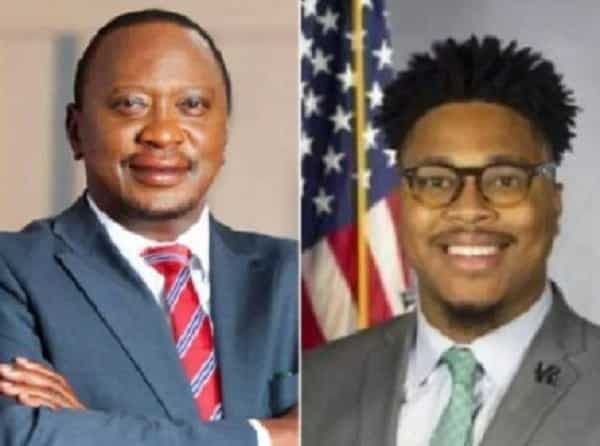 A Dynasty in Diaspora? Kenyans have taken to social media to express mixed reaction after a man with the founding father Mzee Jomo Kenyatta’s name won an election in the United States of America.

A politician by the name Malcolm Kenyatta was declared the winner in the just-concluded Pennsylvania State Representative election.

Citizen TV’s journalist Linus Kaikai has since plunged Kenyans into social media debates after he shared a photo of the politician on his Twitter handle.

He also linked the politician in the dynasty and hustler comparison that has been going on for a while now.

“MEET US Pennsylvania State Representative Malcolm Kenyatta! Some Kenyans would be like “hayiaa DYNASTY YA DIASPORA!” Kaikai captioned the photo.

According to Wikipedia, Malcolm Kenyatta is not related to the first family of President Uhuru Kenyatta, or rather to Mzee Jomo Kenyatta’s family.

Wikipedia describes Malcolm Kenyatta as “a community activist and American politician from North Philadelphia, Pennsylvania who currently serving as a State Representative for the 181st District in the Pennsylvania General Assembly.”

More so, he was born in 1990 to the late Kelly Kenyatta, a nurse and home healthcare aide, and the late Malcolm J. Kenyatta, a social worker, at Temple University Hospital in North Central Philadelphia.

In short, Kenyatta is not a Kenya.

Kenyans who took to the comment section said the following: @mwemab: Most Afrikans outside Kenya were decived into thinking that Mr K. Was a liberator, Africans in Kenya know better!. The reason behind the naming Saleswoman jailed for stealing from employer