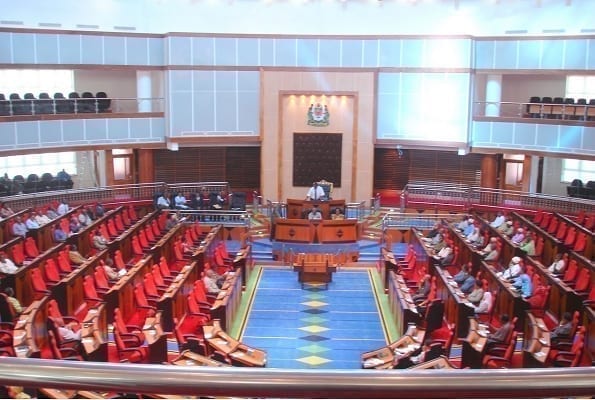 Kenya’s National Assembly will be debating in Kiswahili every Thursday — reviving an initiative by President Jomo Kenyatta that turned the House into a comedy theatre 46 years ago.

On Thursday last week, President Uhuru Kenyatta inaugurated Kiswahili and the bilingual versions of the National Assembly Standing Orders, officially entrenching Kiswahili’s use in the House.

It was a nostalgic feat for the President, given that his father had first decreed in 1974 that MPs debate in Kiswahili, which plunged the House into humorous exchanges as lawmakers struggled with the language.

Records in Parliament show that the first attempt to have Kiswahili as a parliamentary language was on July 4, 1974.

President Kenyatta’s decree came days after Kanu’s National Governing Council (NGC) meeting that had resolved the use of Kiswahili in the House was long overdue.

It wasn’t easy for a majority of the members, including Attorney General Charles Njonjo, famed for his Queen’s English, but President Kenyatta wanted the job done.

President Kenyatta was keen to promote the language that had been stifled during the colonial era and continued to be shunned in the House even after Independence.

The first African MP had joined the Legislative Council (legco) in 1944 and at Independence in 1963 many native Kenyans had been elected or nominated to Parliament, yet Kiswahili was not tolerated in the House.

In the early years of independence, some leaders felt that the adoption of Kiswahili would promote cultural nationalism.

A day after President Kenyatta’s order, Parliament was treated to drama as MPs attempted to contribute in Kiswahili to a motion seeking to establish an impartial agency to oversee land transactions.

House Speaker Fred Mati told MPs they had no choice because the President had demanded an explanation for why Kiswahili had not been adopted during proceedings.

“I have an important announcement to make. I have spoken to his Excellency the President on the question of this House switching from English to Swahili,” parliamentary records quote the Speaker addressing the MPs on July 15, 1974.

He went on: “I have explained to him the difficulties we have switching over to Kiswahili but it is his feeling that we should, as an experiment, start straight away, but we shall in due course start sorting out our difficulties.”

And with that communication Mr Mati ordered that the next MP, Kilungu’s Mutiso Muyu, should address the House in Kiswahili, his order triggering numerous points of order.

One was by Butere MP Martin Shikuku, a stickler to House rules, who protested that MPs were breaking the law by speaking in Kiswahili because the Standing Orders stipulated that debate should only be in English.

Mr Shikuku suggested that the House first suspends the orders.

However, G Kariuki, then assistant minister for Lands and Settlement, responded; “The President, as we all know, is above all laws. Now, he has already decided that we must speak in Kiswahili.”

“We agreed yesterday and now, Mzee is demanding to know why we are not speaking in Kiswahili. I would like us to go on as planned even though some words are hard to pronounce,” said the Speaker.

Then minister for Information and Broadcasting, Mr Robert Matano, a fluent Swahili speaker, was among those who pushed hard for the language’s recognition.

Debate was laced with raw humour as MPs struggled to pick appropriate words to translate parliamentary jargon into Kiswahili.

Kikuyu MP JK Gatuguta wanted to know the appropriate words to use for ‘point of order’, and if they would address the Speaker as ‘mwenyekiti’ or ‘msemaji’, but no one had an answer.

This was indeed uncharted waters for the MPs. The records show that in the quest to speak the language, there are MPs who offered misleading translations.

For instance, one MP said that whenever his constituents went to the Ministry of Lands to ask why the issuance of title deeds was being delayed, they were always told to check again ‘mwezi ujao’.

The MP wanted to know what the officials at the Ministry meant by ‘mwezi ujao’ which never came.

Another MP shot up in protest saying: “I don’t know whether this is the correct translation, or whether it is just applicable to his ministry.”

MP George Anyona lamented he had difficulties expressing himself in Kiswahili.

But a member shouted from his seat that if he found Kiswahili difficult, he should switch to his indigenous Gusii language.

Makuyu MP Wachira Waweru struggled to raise the alarm about shortage of a particular drug in hospitals, as he did not know what the drug was called in Kiswahili.

Mr Waweru started explaining in his mother tongue but was cut short by loud laughter from members.

Mr Njonjo had difficulty in comprehending Kiswahili when Minister Ronald Ngala, who was fluent in the language, sought his explanation as to how the government would deal with religious sects that broke the law.

“Mr Speaker, Sir, I am afraid my Kiswahili is very limited and frankly speaking, I must confess that I did not understand a single word from the honourable member’s question,” Mr Njonjo responded, plunging the House into laughter.

Mr Ngala had to repeat his question in English. The MPs went on to mix English and Kiswahili in their debates.

This became so common that the staff capturing the Hansard (Parliament’s official record of proceedings) complained it had become difficult to transcribe debate.

The Speaker gave a firm order that they must not mix the two languages.

Members would therefore, be allowed to use either of the two languages. This is the practice to date, but Kiswahili is spoken rarely almost always by lawmakers from the Coast region.

It is to encourage its use that President Kenyatta last week unveiled the Kanuni za Kudumu za Bunge la Taifa, toleo la tano (tafsiri ya kwanza).

The National Assembly contains more than 267 Standing Orders, meaning that the translated version will enable an even wider understanding and use of Kenya’s national and official language.

A six-member task force appointed by National Assembly Clerk Michael Sialai in February 2019 and assisted by Kiswahili experts from the University of Nairobi, Moi University and Kenyatta University helped translate the Standing Orders.

The launch means that every Thursday sitting of the National Assembly will be dedicated to Kiswahili use in the debating chamber.

On August 25, 2016, the East Africa Legislative Assembly (Eala) had resolved that Kiswahili should be introduced as one of the official languages of the East African Community (EAC).

The resolution urged the Summit of EAC to amend the treaty establishing the community to provide for Kiswahili as one of the official languages within the region.

Eala MP Abubakar Zein, who moved the resolution, reiterated that embracing Kiswahili is also bound to increase the participation of the people of East Africa in the affairs of the community, as well as promote African culture.

Kiswahili, according to Mr Zein, is flexible and has its root in Bantu languages. An overwhelming number of legislators rose in support of the resolution.

Standing Orders, also referred to as the rules of procedure, help define the character of a Parliament by describing the rights and obligations of MPs while identifying and assigning roles and functions to the key organs of the institution.

They also, among others, set out the manner in which business is to be conducted in an orderly manner, and afford discretionary powers to the Speaker and other presiding officers adequate detail and possible answers to almost every conceivable problem that may arise.

Articles 7 and 120 of the Constitution and National Assembly Standing Order 77 and 223 provide that Kiswahili should be the language of use in Parliament.

Standing Orders 77 and 223 reinforces the use of Kiswahili in the House.

Standing Order 77 provides that a member who begins a speech in any of the three officially recognised languages, shall continue in the same language until the conclusion of their speech.

Article 120 (2) of the Constitution notes that in case of a conflict between different language versions of an Act of Parliament, the version signed by the President shall prevail.

While many parliaments in Africa have either adopted English or French language in their parliaments, others have allowed the use of several indigenous languages in addition to a foreign language.

Kenya has struggled to mainstream use of Kiswahili in parliamentary proceedings and by other arms of government.

This is despite Kiswahili increasingly spreading globally and rapidly becoming more than just ordinary lingua franca in East Africa.

Kenyan man drowns in a swimming accident in Florida