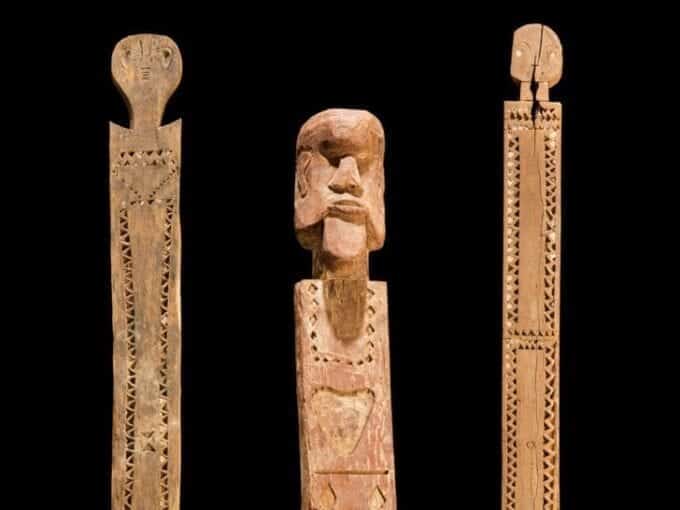 On the coast of eastern Kenya live nine tribes collectively known as the Mijikenda. For generations, the Mijikenda have farmed their homesteads, where they live with up to 60 extended family members. According to Mijikenda belief, the spirits of the dead linger there, too, commemorated by statues erected around the homestead. These figures are held in high regard: The Mijikenda have been known to pour sips of wine on the ground in front of the statues so that the deceased may indulge.

Wooden carvings called vigango sit on the boundaries of some of these homesteads. Vigango (singular: kigango) are some of the most powerful Mijikenda statues. They are made of termite-resistant hardwood and stand between four and nine feet tall. Each kigango is the physical embodiment of a deceased member of the Gohu, a secret society of men chosen from seven of the Mijikenda tribes. The Gohu member’s family must hire an artist to craft the kigango and pay for a ceremony and celebration when the carving is complete. Some spend years saving. According to custom, failure to honor their relative will result in bad fortune. Crops will shrivel. Cows will die.

Further adversity may ensue if anyone removes a kigango from its post. Even if a family relocates its homestead, vigango must be left behind to be worn down naturally by the elements. So, in 2008, when Denver Museum of Nature & Science (DMNS) staff learned the significance of the 30 vigango in its collection, it realized something had gone very wrong.

It’s difficult to overstate how much the American public trusts museums. Respondents to a 2018 survey conducted by analytics firm Reach Advisors had more confidence in museums than in any other institution on its list, including local newspapers, the U.S. government, and academic researchers. The histories of these esteemed halls, however, are complicated and troublesome. “Many museums were founded through the colonial endeavor,” says Brandie MacDonald, director of decolonizing initiatives at the Museum of Us in San Diego. As European nations colonized Africa, Asia, and the Middle East, she says, they looted the artifacts of the peoples who called those lands home. In Europe, the spoils were sold to galleries, private collectors, and museums.

Eventually, this art made its way overseas. Along with stolen items from North and South America, “exotic” artifacts became part of the United States’ most prized collections, including in Colorado. For years, a largely white pool of curators thought of themselves as the keepers of culture. As Indigenous communities advocated for the return of their heritages, that mindset began to shift, even if demographics didn’t: A 2018 survey from the Andrew W. Mellon Foundation found that in 136 U.S. art museums, 80 percent of leadership, curators, conservators, and educators were white.

Despite a continued lack of diversity in staffing, Colorado museums have improved their collection ethics. Now that increased awareness about unjust power structures is forcing America to re-examine its fraught history, Centennial State museums are trying to meet the moment.

Plenty of Indigenous art arrived ethically at Colorado’s museums. That doesn’t hold true for the vigango. Thieves frequently take them from Mijikenda homesteads and pawn them off to souvenir shops, which sell them again, often to the same man: Ernie Wolfe III, a Los Angeles art dealer. In 2006, the New York Times reported that Hollywood elites purchased vigango from the Ernie Wolfe Gallery. “Then they would donate them to unsuspecting museums,” says Stephen Nash, director of anthropology at the DMNS. “They get a tax deduction, we get a cool collection of undeniably beautiful stuff, and everybody wins, right? Except for the people whose ancestors just got stolen.”

Wolfe denies knowingly purchasing stolen goods, according to news reports, though his gallery’s website still advertises vigango, claiming they’d been abandoned. Experts condemn this practice, but when Nash and former fellow curator Chip Colwell learned how important vigango were to the Mijikenda, they focused not on assigning blame but instead on repatriation, the act of returning an item to its country of origin.

Repatriation is just one element of decolonizing museums—that is, actively working to undo the harms caused by colonialism—but it’s often the most high-profile. For a long time, curators, fearing their collections would be drained, resisted calls for repatriation. In 1980, the Denver Art Museum (DAM) became the first museum in the nation to voluntarily return carvings known as Ahayu:da, or war gods, which had been stolen from Zuni Pueblo shrines—but, as Colwell’s book Plundered Skulls and Stolen Spirits details, the decision came after resistance from the staff (newspapers wrote about the Zuni’s demands, sparking public outcry in support of the tribe). The DMNS, for its part, put the skeleton of a Pueblo woman it had on display back into storage in 1970 to avoid bad press but didn’t immediately return the remains.

A federal law passed in 1990 mandated change. Known as the Native American Graves Protection and Repatriation Act (NAGPRA), the legislation requires all federally funded institutions in the United States to send American Indian tribes lists of the items and human remains held in their collections. If a tribe can prove that remains belong to its ancestors or that an item is sacred, is used in a modern-day ceremony, or is an object of cultural patrimony (communally owned), the law mandates that museums give it back.

Negotiations, at first, were painful. Vincent Randall, an enrolled member of the Yavapai-Apache Nation, worked as a Western Apache interpreter during consultations, including a contentious meeting in the early 2000s with the DAM about seven cultural items, including three masks. “It was very offensive to the elders to be told that we needed more ‘documentation,’ ” Randall says. “Our oral traditions weren’t given the same weight.” (The DAM ultimately returned the items, and a spokesperson for the museum gave late curator Nancy Blomberg credit for developing the museum’s repatriation processes.) NAGPRA is also infrequently enforced, with only a few institutions out of hundreds receiving fines for noncompliance.

Over time, the dialogue between Colorado museums and tribes improved, and progress has been made. The DMNS no longer holds Native American human remains; along with the DAM, History Colorado, and the University of Denver Museum of Anthropology, it has returned multiple items under NAGPRA. Curators from these institutions also now include Indigenous voices in their exhibits, inviting tribal members to help develop displays and illustrate the ways their cultures have transformed in the 21st century. But while NAGPRA, which only applies to American Indians, lays out clear rules for returning objects, no such widely agreed-upon structure exists for repatriating art and artifacts outside the United States. Ensuring the vigango made it back to Kenya was an entirely different logistical and diplomatic challenge.

Purity Kiura was excited when Nash approached her at a professional training in 2018. As the director of antiquities, sites and monuments at the National Museums of Kenya, she was used to institutions outside of Africa resisting her requests for repatriation. “There is no international law that says you have to take these things back,” she says. “It’s all goodwill and negotiations.”

The DMNS had been struggling with such negotiations for years by the time Nash and Kiura met. The museum had struck a deal with Kenyan authorities and even held a farewell ceremony for the vigango in 2014. Then the process hit a snag: The Kenyan Revenue Authority demanded a $40,000 import tariff from the DMNS. The vigango sat in storage at DIA for three years as Nash sought a less-expensive solution; they were eventually brought back to the DMNS. “It was embarrassing to all of us,” Nash says.

Kiura says situations like this aren’t uncommon. Indigenous peoples long to see objects returned, but many countries’ governments request inordinate fees from museums, hindering the process. The timing of Kiura’s meeting with Nash was serendipitous, though. After he explained the predicament, Kiura returned home to Nairobi, where a recent law said museum artifacts should not be taxed. Finally, the carvings went home.

The DMNS’ efforts to repatriate the vigango, Kiura says, is what she wants to see from other museums, which have garnered funding and boosted their reputations, in part, through stolen art. Leaders of Denver’s museum scene say things are changing: People from artworks’ cultures of origin frequently enhance curators’ understandings of the collections they hold. History Colorado worked closely with the state’s Ute tribes on its recent Written On The Land exhibit, and since 2019, the DAM has collaborated with an Indigenous Community Advisory Council, which consults on exhibits connected to Native American art. DAM director Christoph Heinrich says his team pairs art with observations from various perspectives to avoid positioning curators as the ultimate authorities on collections.

Yet even in Colorado’s most established museums, more work is needed. The North American Indian Cultures Hall at the DMNS hasn’t changed much since 1978; its dioramas depict tribal nations frozen in time, rather than as living, breathing cultures. The DAM has pieces in its collection that require further provenance research. And both are trying to add more people of color to their majority white staffs.

These changes will be arduous, expensive, and will take time. But museum leaders say they’re necessary—and for Nash, who visited Kenya in October 2019 to meet Mijikenda members and celebrate the vigango’s return, they’re life-altering. “We’d worked on this issue for 12 years. I needed closure,” he says. A Museums of Kenya employee guided Nash through Mijikenda homesteads, introducing him to elders, dignitaries, and a man whose own vigango—seven of them—had been stolen.

“He wasn’t angry,” Nash says. “He wasn’t really sad, even. He was just melancholy. How do you go through life knowing that seven of your ancestors had been taken from their final resting place? That’s something nobody should have to go through.”

Alfred Mutua says that Sh100 million has been paid to undermine