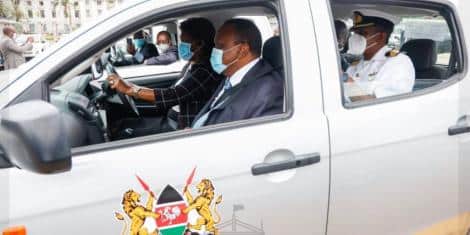 President Uhuru Kenyatta on Tuesday, November 3, enjoyed a free ride from Kitui Governor Charity Ngilu who drove him in a double-cabin pick-up vehicle.

The two leaders were at the Kenyatta International Convention Centre (KICC) in Nairobi County during the kicking off of the issuance of 10,000 title deeds to residents of Samburu County.

During the flagging off of 75 locally assembled vehicles for the National Titling Programme, Kenyatta challenged Ngilu to drive him in the new vehicle.

“The reason I am handing over the first vehicles to you is that you are going to give me a ride in one,” the Head of State stated. 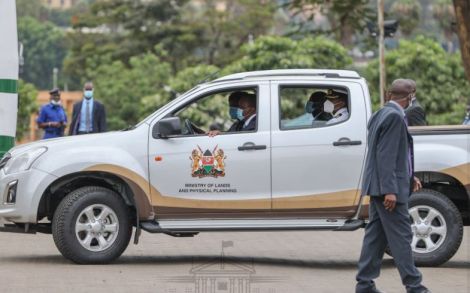 The governor was clearly taken by surprise as she signed in disbelief. She, however, stepped up to the challenge as she confidently headed for the driver’s seat as the President settled in the passenger seat.

Two of Uhuru’s bodyguards also got into the rear seats of the vehicle as Ngilu ignited the vehicle and drove at a moderate pace in the venue.

The leaders drove off for some metres before turning around and heading to where they started. All this while, Uhuru’s security detail comprising of six bodyguards jogged alongside the vehicle in the short distance.

During his address where he acknowledged that the vehicles were assembled locally, Kenyatta encouraged county governments to give priority to locally manufactured products as a way of creating employment for the youth.

“Let us be true patriots, people who love their country and buy what is made locally – that which enables Kenyans to get jobs. I want to encourage that as we move forward,” he stated.

He further stated that his administration was working to solve the historical land question in the country through the intensified issuance of title deeds.

The President expressed satisfaction that over 5 million title deeds had been issued to Kenyans since his administration came to office in 2013.

“I am happy because gradually we are fulfilling the promise we made to the people of Kenya. We are solving the land question by issuing title deeds so that Kenyans can put their land to productive use without fear of losing their property,” he noted.

The President issued two title deeds to the Ministry of Tourism and Wildlife for the 2,000-acre parcel of land earmarked for the expansion of the Nairobi National Park and the 155 acres Nairobi City Park. 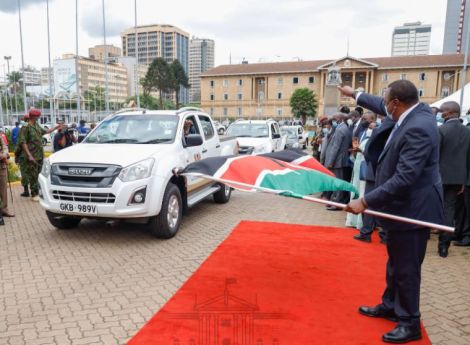 Also issued was the title deed for the 50-acre Naivasha Special Economic Zone which was handed over to the County Government of Nakuru.

“For the first time since the Nairobi National Park was gazetted, the Government is allocating more land so as to conserve it for posterity,” the President stated.

Kenya Kwanza is the Majority in The National Assembly Rules Wetangula