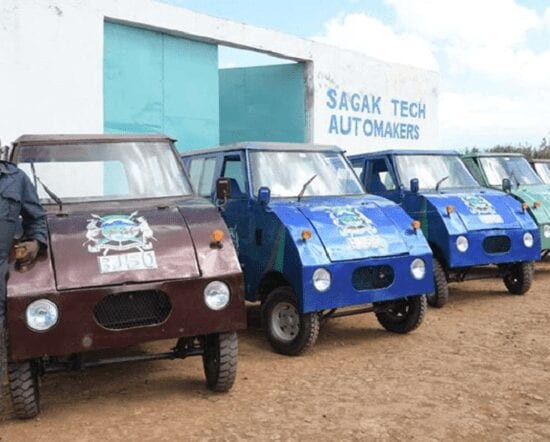 For the last three years, the Laikipia County government has been supporting a local start-up — Sagak Tech Enterprises — to venture into mass production of a four-wheeler tuktuk, with an eye on the Sh27 billion Central Kenya Region Economic Bloc (Cereb) market.

Despite enlisting the partnership of Dedan Kimathi University of Technology (DeKUT) engineers and other relevant regulatory and standards agencies, it had to take months of exchanging correspondences and hours of phone calls lobbying for the motor vehicle christened BJ-50 to be get the approval of the Kenya Bureau of Standards (KEBS) and registration by the National Transport and Safety Authority (NTSA).

In one of the correspondences to Sagak Tech Chief Operations Officer Wollace Kariuki, NTSA Director-General George Njao laid bare the legal and regulatory hurdles that have, for ages, been frustrating local manufacturing in favour of imports.

“We wish to inform you that the authority has given your request due consideration. However, according to our Transport Integrated Management System (TIMS), registration of any motor vehicle requires that KRA (Kenya Revenue Authority) Customs Entry maps in TIMS before the applicant lodges the chassis for registration,” said the letter dated July 23, 2020 seen by the Nation.

Apparently, the country’s laws and regulations never envisaged local production of vehicles such as the Laikipia BJ-50 tuktuk.

According to another letter dated June 12, 2020 from KRA to Mr Kariuki, registration of the locally manufactured tuktuks did not fall under their purview.

“We have received your request and wish to point that registration of the BJ-50 as it is currently, falls outside the purview of Customs since Customs only regulates international trade,” the letter signed by Mr Joan Omole read.

The BJ-50 tuktuk, manufactured at the Nyahururu-based firm, acquired number plates on October 27, 2020 after intense intervention from the county government.

“When the TIMS was being put into place, nobody thought that we could actually manufacture tuktuks or even motor vehicles domestically. I wonder whether the local innovator would have succeeded on his own with the current systems in place,” Laikipia Governor Ndiritu Muriithi said.

“We encountered lots of challenges when trying to get number plates for the Laikipia BJ-50. Most of the rules were created during the colonial times, and that is why it is sometimes incredibly impossible for small businesses to thrive,” Mr Muriithi said.

The county has placed an order to buy 36 BJ-50 cars from the firm as a way of celebrating 100 years of of Nanyuki town’s existence as well as boosting local innovation.

Mr Kariuki, who is also a member of Laikipia County Development Board (LCDB), says the locally manufactured and assembled cars will help in streamlining the delivery of services to citizens.

He says all the eight county departments — Trade, Agriculture, Health, Administration, Education, Finance, Infrastructure and Water — have placed their orders for the units so as to easily reach out to the public in a more cost-effective way.

The county intends to purchase six units whose manufacturing and assembly has currently been finalised.

Mr Kariuki argues that the cars are fuel-efficient and will help in running short interdepartmental errands in Nanyuki town which is currently the county headquarters.

“For instance, the governor’s office here in Nanyuki is located far away from the executive offices. The vehicles will help in running short errands and enhance efficiency in service delivery to our citizens,” he said.

Each unit costs Sh450,000 but Mr Kariuki says the price might be reduced to Sh350,000 as more sales are made as demand increases.

Mid this year, Trade and Industrialisation Cabinet Secretary Betty Maina toured the firm, giving it the greenlight for mass production of the cars.

Laikipia BJ-50 has a 150cc motorcycle engine that is meant to reduce the consumption of fuel.

Miguna is Luo king in waiting, will take over from Raila – Mutahi Ngunyi