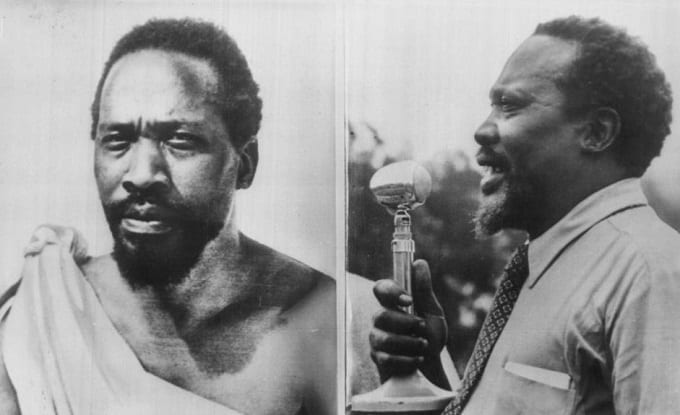 Jomo Kenyatta was the first President of the Republic of Kenya. His year of birth is estimated to be the early 1890s because clear records were not kept at that time. He was given the name Kamau wa Muigai meaning Kamau son of Muigai.

He was born in Ngida village, Gatundu Division in Kiambu. He lost his father at a very young age and their family was and his younger uncle Ngengi took over their family. Kenyatta’s name was now changed to Kamau wa Ngengi.

Later on, he joined the Church of Scotland Mission as a pupil at Thogoto in November 1909. Instilling Christianity in African people was part of Britain’s civilisation mission.

In 1913 he was circumcised according to Kikuyu traditions. The missionaries were against that practice but they had no authority to stand in his way because he had to go through it to be recognised as an adult.

He went back to the Missionary school afterwards and when he was told to choose a Christian name during baptism he chose Peter and John. He was told that only one name was required so he decided to take the name Johnstone.

His name, therefore, changed to Johnstone Kamau after he was baptized in August 1914. He then moved out of the mission dormitories and went to live with friends.

Kenyatta used to visit his aunt in Narok who was married to a Maasai chief. After some time he adopted their culture and fell in love with their jewellery especially the beaded belts they called Kinyata.

He decided to modify that name to Kenyatta and started identifying himself with it. He changed his name to Johnstone Kenyatta wa Muigai.

Kenyatta whent to the UK in 1938 to present his thesis after studying a diploma in anthropology from the London School of Economics (LSE). His brother in law Mbiyu Koinange was also in London at that time and he advised Kenyatta to entirely africanise his name.

That is when he changed his name to Jomo Kenyatta. Some reports say that the name Jomo means ‘burning spear’ in Kikuyu while others say that he derived the name from Johnstone and Muigai. 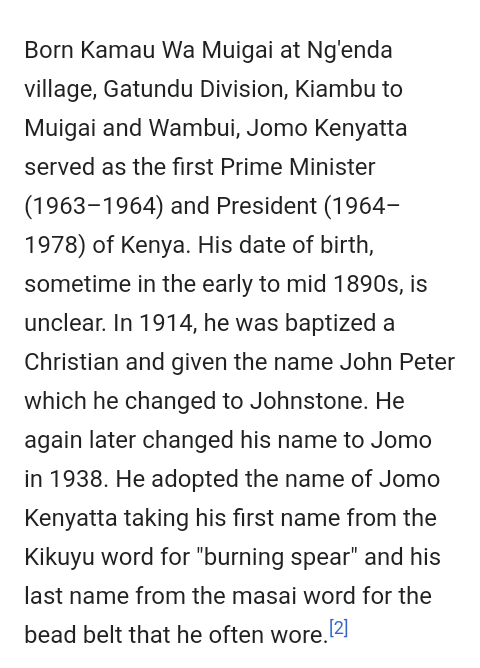 Kenyatta had 4 wives but Ngina was the famous one since she was alive when he was president. He served as the First Lady and together they had a son named Uhuru Kenyatta who is the current president of Kenya.

Video: Joy Mukwanjero’s tale after 21 years in US and homelessness in 254

Kenya Embassy ‘not aware’ of Raila and governors’ US meeting