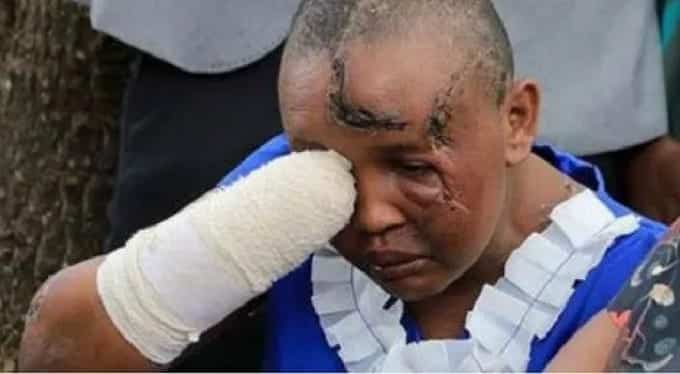 A Kenyan  man who shocked the nation after chopping off his wife’s hands over infidelity and infertility claims has been found guilty of attempted murder and sentenced to thirty years in prison.

Stephen Ngila Nthenge attacked Jackline Mwende at their home in Masii with a machete on July 23, 2016, which also left her deaf in one ear.

Both of her hands were also wholly severed and she sustained serious injuries to her head and back.

Mwende was slashed with a machete by her husband in what she initially described as a despite relating to her inability to conceive during their 7-year marriage. She later confessed that her infidelity was the main reason behind the brutal attack.

“We had sought accommodation in Machakos town because I did not want to bring him to my matrimonial bed,” she said of her affair.

Mwende had stated that after an encounter with her lover, Ngila had returned home raging mad armed with a machete which he used to brutally attack her. Ngila had gotten intelligence from a neighbor whom he had appointed to spy on his wife.

“It was on the Saturday of July 23 and after spending time with the other man I went back home, where I lived alone because my husband had taken off three months earlier.

“It was after the attack that I found out that my husband had asked my neighbors to spy on me. They were the ones who told him of my trip to Machakos with the man I conceived,” she added.

Ngilu has 14 days to appeal the sentence.

Despite the claims of infertility Mwende has since given birth to a boy, Zawadi, who was fathered by her secret lover.

She received a lot of support from the public and organisations such as a medical sponsorship that had her prosthetic limbs fixed in South Korea.

In 2018, The Merck Foundation CEO Rasha Kelej paid Mwende a visit and built her a two-bedroom house.

Video:Uhuru calls for prayers upon exit from ICC Status Conference

VIDEO: Police Search For Rogue Tout As Woman Thrown Out Of Matatu Dies

The Holy Spirit is the ultimate personal Prophet-Pauline Adongo