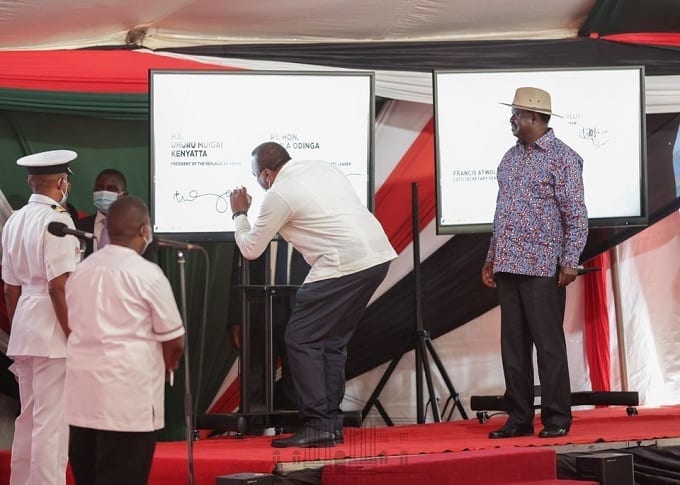 Opposition leader Raila Odinga has made his debut on Jubilee Party’s Facebook page.

It replaces a photo of President Kenyatta and that of his Deputy President William Ruto, amid reports the duo has suffered a political fall out.

Odinga is the Orange Democratic Movement (ODM) party movement, Kenya’s main opposition party which in normal circumstances would not be associated with the ruling Jubilee party.

But since the famous handshake between Odinga and Uhuru, there has been an implosion in Jubilee Party which was again made worse by BBI with reports suggesting the political relationship between the

Ruto has never hidden its distrust for the BBI, an outcome of the March 2018 peace pact between the president and Odinga and his long-time opposition foe.

The initiative was symbolized by the famous public handshake between the two men – a moment now simply referred to as “The Handshake”.

The DP was conspicuously absent during the two historical events.

Ruto’s supporters fear the rapprochement signals Kenyatta’s plan to renege on a power-sharing and succession pact, under which he would back Ruto for president at the 2022 general elections after serving two terms.

Any major constitutional amendments proposed by BBI might lead to referendum votes, which could force Ruto to openly break with Kenyatta and begin an opposition movement.

These divisions come against the backdrop of an intra-party split which saw the two top leaders hold separate parliamentary group meetings with Ruto’s wing inviting 139 Members of Parliament to his Nairobi Karen office, to plan their strategy in the House on the BBI and ‘Hustler Nation’ agenda under the United Democratic Alliance.

Diaspora Sad Stories And Challenges Of Kenyans In Australia