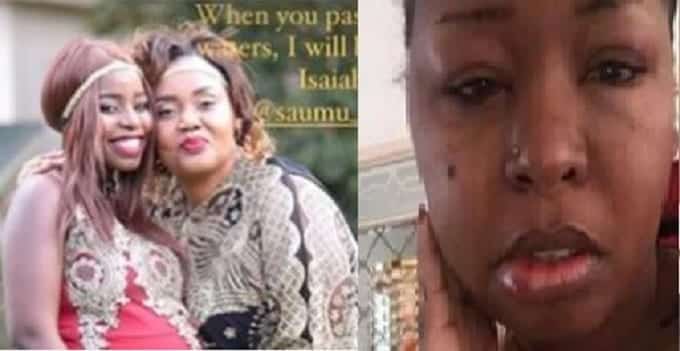 Former Nairobi Governor Mike Sonko’s wife Primrose Mbuvi has promised to stand by her stepdaughter Saumu Mbuvi through the difficult times she is currently experiencing.

She made the revelations on social media, saying he “nearly killed me” as he announced they had parted ways with the Senator, who is yet to respond to the allegations publicly.

Primrose shared a picture she took with Saumu while she was pregnant accompanied by a bible verse assuring her that she would be by her side.

“When you pass through the waters, I will be with you; Isaiah 43:2,” she posted.

Saumu and Loitiptip welcomed their first baby together on March 8 as the world was celebrating International Women’s Day.

The two met in Mombasa where Saumu was on holiday while he was there for work, and they had been dating since 2019 and at one point planned to get married before the nasty breakup.

“Wedding date confirmed,” she captioned a picture of herself and the senator in June 2020.

Her previous relationship with businessman-cum-politician Ben Gatu also ended after she alleged that he had been violent.

“We started as friends and dated for nine months and we broke up when I was pregnant. He used to beat me and after sharing with friends I went to my dad and told him I couldn’t take it anymore,” she disclosed in a past interview.

Chebukati Wins Round One Against Cherera faction At Supreme Court