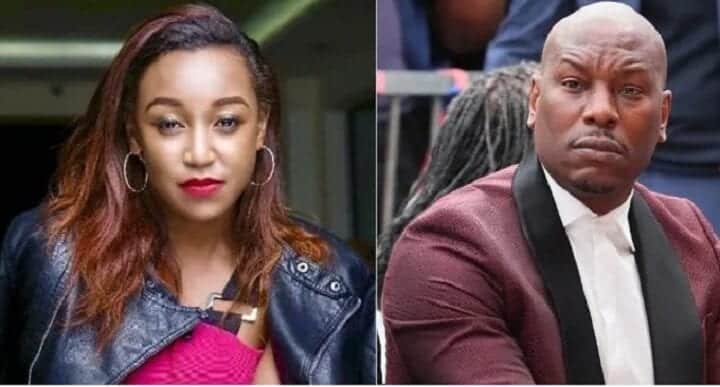 Former K24 TV anchor Betty Kyalo confronted celebrated US actor, Tyrese Gibson after he shared a wedding photo of the Kenyan journalist with her ex-husband and NTV anchor Dennis Okari.

Kyallo was irked by the American singer’s caption on the photo posted on his Instagram page, claiming that Okari ended up marrying her best friend, Rosy Ohon, who was the maid of honour at their nuptials in 2015.

Tyrese, the Fast & Furious movie star, said that  “A monster will always be a monster and will only wait for the right moment to strike, and that the people one calls friends always want what you have in your life”.

The US musician also shared a photo of Okari with his current wife, Naomi Joy, claiming that she was Kyallo’s maid of honour at the 2015 wedding.

Betty Kyallo, who was offended by Tyrese’s post, urged him to pull it down and issue an apology. She also defended the two ladies, her best maid and Okari’s wife, saying that Tyrese misinterpreted the photos.

“I am that bride and that’s my beautiful maid of honour (Rosy Ohon) who happens to be a very respected gospel artist in my country Kenya. She didn’t do what you purport. Those are two different women.

“Kindly get your facts right. You are a respectable personality and you owe it to yourself and your following to ascertain the truth before you tarnish people’s character. Thank you. Best from I, Betty and Kenya,” Kyallo, who recently returned to KTN, responded.

In a separate statement, the media personality added that her character had been assassinated by the malice spread by the Hollywood star.

However, she declined to reveal whether she would file a legal suit. Tyrese had not yet responded by press time.

Okari and Kyallo divorced after six months after their publicised wedding. The two co-parent to raise their daughter, Ivanna.

“I think it was getting married a bit young. I was 26 and I think I hadn’t seen my full potential, I hadn’t lived life, I hadn’t explored life by myself and there is no issue with that.

PROPHET OWUOR IN A SHOPPING SPECTACLE AT CITY CENTRE