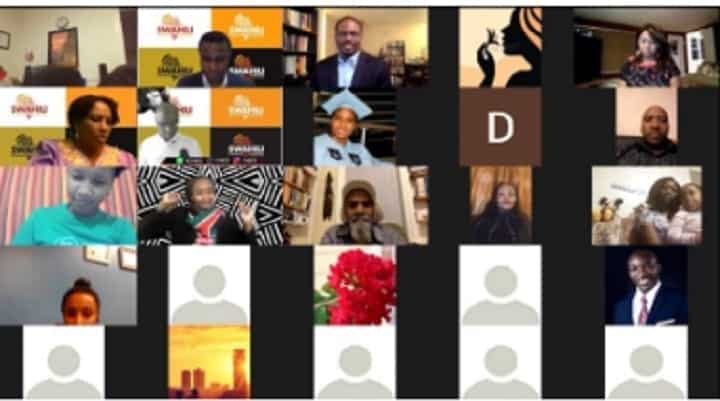 A specialized institution that will promote Kiswahili language and culture in the US has been launched in the city of New York.

Registered as a non-profit organization, Swahili Cultural Institute was started by a group of Kenyans living in the US and launched at an auspicious event that was beamed virtually from New York on 12 December 2020 and attended by guests from more than 10 countries in Africa, US, and Europe.

The Institute aims to capitalize on the growing interest in Kiswahili language in the US, and will offer classes for children and adults, as well as organize Swahili cultural events in New York.

The Institute’s President, Mr. Kevin Somoni Machine, says they will target Africans in the diaspora, Americans and other nationalities living in the US, including students, diplomats, UN personnel, academics, researchers, religious groups, volunteers and other groups interested in learning the language.

Kiswahili is the most widely spoken African language and has grown to become one of the 10 most widely spoken languages in the world. Top American universities such as Harvard, Yale, Columbia, Stanford, Princeton, as well as Cornell, Howard, Ohio, Rutgers, and Texas, among many others.

The US State Department has designated Kiswahili as a ‘critical language’, and the Department of Defense has termed it a ‘strategic language’ citing its importance for their security as well as economic interests.

Also, the popular African-American holiday “Kwanzaa” has its seven principles of the African-American Renaissance (Nguzo Saba) drawn from Kiswahili. More and more Americans are adapting Swahili names and the interest in the language continues to grow.

“This is a great milestone. As Africans living in the US, we want to tell the African story in our own language which is the true signature of our voice,” said Mr. Machine.

“The Institute will not only serve as a language centre of excellence but will also foster a positive narrative about Africa. It will be the gateway to Africa in the diaspora,” he added.

A linguist and a financial consultant by profession, Mr. Machine said his team started the initiative because of the growing interest in Kiswahili that is sweeping across US and beyond.

An approximately 100 universities and schools in the US teach Kiswahili, according to Prof. Leonard Muaka who teaches the language at Howard University in Washington DC. Prof Muaka is also the President of CHAUKIDU (Chama cha Ukuzaji wa Kiswahili Duniani), a global association for the promotion of Kiswahili.

Kiswahili is the most widely-spoken African language in the world, with more than 200 million speakers in more than 12 countries in East, Central and Southern Africa, as well as in Europe and the US. It is the national language in Tanzania and Kenya, and is spoken in parts of Uganda, Democratic Republic of Congo, Rwanda, Burundi, Zambia, South Sudan, Somalia, Comoros, Mozambique and Malawi. It will also be taught in schools in South Africa, Namibia, Zimbabwe and Botswana. Other countries where Kiswahili is taught include Egypt, Libya, Nigeria, Ghana, and the Middle Eastern countries of Oman, and the United Arab Emirates.

So far, the African Union, the EAC and SADC have adopted Swahili as an official language. With Africa having more than 2,000 other languages, most of them Bantu, Swahili is an excellent interlocutor for all these languages.

The Chief Guest at the well-attended launch event was Kenya’s Ambassador to the US, Amb. Lazarus Amayo.

“I congratulate Mr. Machine and his team for starting this initiative that we believe will go a long way in promoting Kiswahili as a language in our continent and beyond,” said Amb. Amayo.

“I am inclined to highlight the importance of promoting and preserving the African culture through African languages like Kiswahili that enables linkages not only in the continent but between the continent and the diaspora, like the one we have here, in North America. Kiswahili has many advantages over many other languages,” he said.

The Ambassador noted that Kiswahili would enable Africans to tell their story in their own language, adding that it can also be used as a ‘bridging’ language, especially where there is a divide between French-speaking and English-speaking communities.

“They find in Kiswahili a common language for communications for business and the like. And so, Swahili Cultural Institute is therefore well-positioned to promote, showcase and ultimately help in the development and strengthening of the language and culture, not only in the US, but globally in view of the growing importance of multilingualism,” said Amb. Amayo.

Professor of Kiswahili in the US

A Guest Speaker, Prof. Kiarie wa Njogu, the Director of the Programs in African Languages and senior lecturer of Kiswahili at Yale University, spoke about the history and growth of Kiswahili in the US.

“Kiswahili has existed in the US for a very long time. It started long before we even got independence. But by then Kiswahili was mostly offered to the army, mostly as part of national security in the US. And also, during the Cold War, Kiswahili continued to be offered to the same groups of people to kind of counter the expansion of communism,” said Prof. Kiarie.

He added: “However, the big push for Kiswahili in American academia came in the 1960s during the Black Power movement. This is the time when our brothers and sisters based in the US, pushed for the introduction of African content within the academic system.

Prof. Kiarie said this was the right time that this Institute was being launched, “because the start of free trade under the Africa Continental Free Trade Area (AFCFTA) presents a huge market with opportunities, I think Kiswahili will be better placed to compete with other languages in almost every field. We can actually say, Kiswahili is the language that will welcome you to Africa. So, we can say ‘Karibuni Africa’.”

On his part, Prof. Mukoma wa Ngugi, an Associate Professor of English at Cornell University, and the co-founder of Mabati-Cornell Kiswahili Prize for African Literature, spoke about the importance of languages in the society.

“The question is: what is a language? You could take a language to be transactional, but you could take language as something that carries an intrinsic value in the history of a people. As a co-founder of the Mabati-Cornell Kiswahili Prize, I have seen just how deeply deprived African languages are. That’s why the Swahili Cultural Institute is here,” said Prof. Ngugi.

The speakers’ presentations were timely as the Swahili Cultural Institute’s mission is to encourage more intellectual dialogue, build an inclusive knowledge society and inspire creativity while preserving African cultural heritage.

Children and young people were also well represented at the launch event. As Swahili ‘Spelling Bee’ attracted over 20 contestants aged between 8 – 21 years, who participated in the stimulating quiz held prior to the main event.
The winners were announced by the distinguished Kenyan TV journalist, Ms. Anne Ngugi, who awarded various prices to the top future linguists.

Coordinated by Board Member, Dr. David Angwenyi, an experience educator and leader in New Jersey, the Kiswahili Spelling Bee drew a lot of enthusiasm from the youth who are eager to learn and connect with their parents’ language and will now become an annual event.

“I congratulate the winners of the Spelling Bee. This is a foundation that we need to treasure because those young speakers today will be greater promoters of Kiswahili language tomorrow. At the governmental level, the Kenya Embassy in the US is ready to partner and work with the Swahili Cultural Institute beyond the launch, with the aim of having the potential benefits of the Institute reach a much wider audience. And this will also be part of Ministry of Foreign Affairs’ ongoing engagement with the diaspora,” said Amb. Amayo.

In his closing remarks, Dr. Angwenyi thanked the participants for their passionate support. “Under the aptly-themed program: ‘Lugha Yetu, Utamaduni Wetu’, you will get the opportunity to hear and learn from various language and cultural experts as they discuss pertinent issues relevant to Kiswahili and other African languages and culture. We hope to see all of you there and in related programs going forward,” said Dr. Angwenyi.

I Will Marry When I Want, Bachelor MP Johanna Ngeno Declares