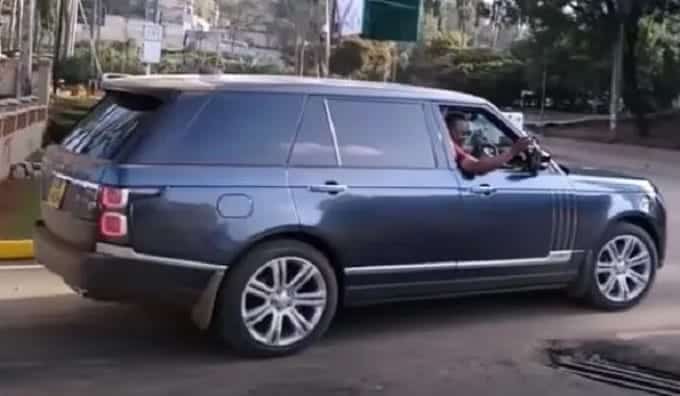 President Uhuru Kenyatta was spotted driving a brand new Range Rover after he had inspected the Green Park Terminus at Old Railways Club in Nairobi.

The bus station will be key to Nairobi Metropolitan Services (NMS) and its Deputy General Mohamed Badi who is keen on banning matatus from the Central Business District (CBD).

The agency has kept on postponing the relocation exercise as it fast-tracked the completion of the terminus and others spread across the city.

Uhuru left the station while driving himself in the Range Rover Vogue on Sunday, March 7. A spot check by Kenyans.co.ke established that the 2020 model of the vehicle goes for approximately Ksh15 million before the addition of additional features such as armouring.

His aide de camp, however, enjoyed the ride alongside Uhuru. The other presidential escort unit officials were aboard other cars which were part of the entourage.

The President stopped for a while to greet the crowd that was chanting his name,

“Eh mambo! Mko salama wote. (Hello. I hope you are all fairing well),” Uhuru, dressed in a maroon short-sleeved shirt, before speeding away.

The car was first spotted at the Lee Funeral Home on December 18, 2020, when the first family passed through the morgue to pass their condolences to the President’s niece.

The previous month, he was also spotted in a brand new Mercedes Benz S-class. Uhuru ditched his state SUVs for the shiny black posh car at the public event in Nairobi.

The President also has a liking for Mercedes G Wagon, Landrover Defender, a 2017 Lexus LX570, and can also step out of his comfort to ride in Sedans and Toyota Probox, especially when in need of anonymity.

Idol worship:Protests in Kisumu Over Monument