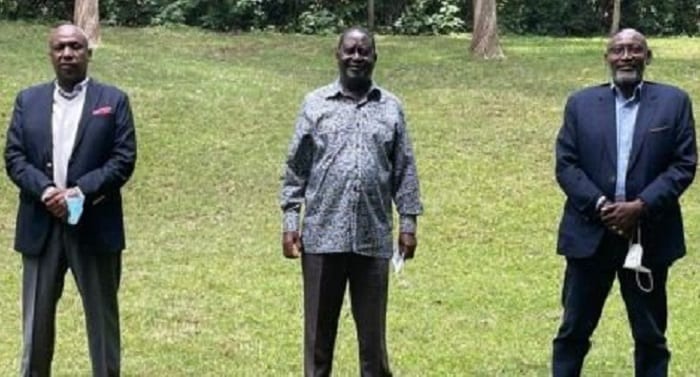 According to a statement by Gideon Moi, the meeting took place at Raila Odinga’s home in Karen, Nairobi.

“I am deeply impressed by Raila Odinga’s quick and steady recovery; a clear indication of his resilience even in the face of adversity. We wish him good health, long life and boundless joy as one of our country’s foremost patriots,” the senator said.

Odinga had contracted Covid-19 and went public about how much the virus had affected him.

The meeting is likely to have some political undertones due to the personalities involved and their common agenda in the Building Bridges Initiative.

They are also sons of the country’s founding fathers, Jomo Kenyatta, Jaramogi Oginga Odinga and Daniel Moi who ruled for 24 years.

The presence of Uhuru’s brother in the meeting also indicated that the discussion had the head of state’s blessing.

Muhoho, who mostly spends his time running the Kenyatta family businesses, has been reported to be a master political strategist and the ear of his elder brother, Uhuru.

President Kenyatta was expected to meet Odinga over the weekend to iron out issues regarding the future of the BBI in respect to ODM Deputy Party Leader  Wycliffe Oparanya’s dalliance with Deputy President William Ruto.

Sources claim that Oparanya’s u-turn on the priority of the BBI and his meeting with the DP had raised concerns at State House.

How robbers stole Sh30million and blew it on Mercedes Benzes, new 60 inch TVs

MOTIVATIONAL BY BETTY MUTHUMBI – Climb upon Him and cling to Him