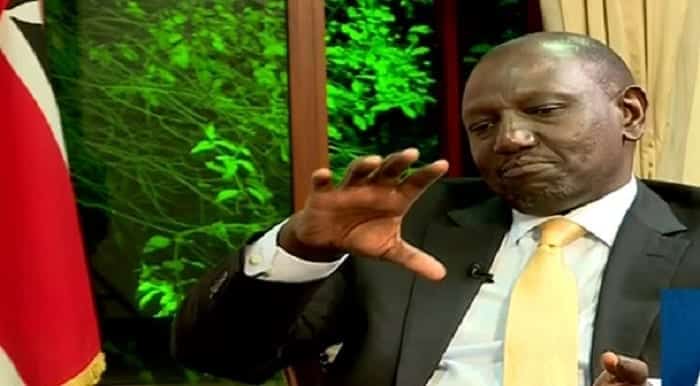 Deputy President William Ruto has for the first time admitted in public that he has differences with President Uhuru Kenyatta, that have seen him pushed away from government.

Speaking to Citizen TV‘s Linus Kaikai on Thursday night, Ruto said that things went haywire after the 2017 General Elections when people he termed as “cabals” joined the government.

“You cannot with certainty say that you monitor when I talk or not talk to my boss,” Ruto told Kaikai. “Admittedly we have challenges. It is in the public domain that the way we worked up until 2017 is different to the way we work now. It is a choice of style.”

The Deputy President seemingly pointed fingers to President Uhuru Kenyatta, accusing him of choosing other people over him to run government affairs after the 2017 elections.

“The President has broken no law…he has chosen a different style and it is his prerogative…My advice, when sought, has been forthright and honest. If the President decides to elevate other people, consult more with the former leader of Opposition, I have taken it with grace. You have not heard me complain.”

He says the opposition was invited into the government and changed the priority of the ruling Jubilee Party, with the Building Bridges Initiative (BBI) taking centre-stage.

The DP also took an issue with Jubilee Vice Chairman David Murathe, using his name to insinuate that he was the architect of chaos in the government and in the Jubilee Party.

“The style changed and it is the prerogative of the President being the boss…Because of change of style, priorities changed. Big 4 Agenda slowed down. My space was taken up by other people. It became urgent to change the constitution,” said Ruto

Despite admitting to having been sidelined, Ruto said he would not resign from the government.

“I am not yet there because there are people who believe that they can push me to resign. That’s the whole scheme. I am not going to give them the opportunity to celebrate,” he added.

He also defended himself against claims that he had gone against the President by taking the Sputink V vaccine instead of the government, saying that he was not invited to the State House when the Cabinet was being vaccinated.