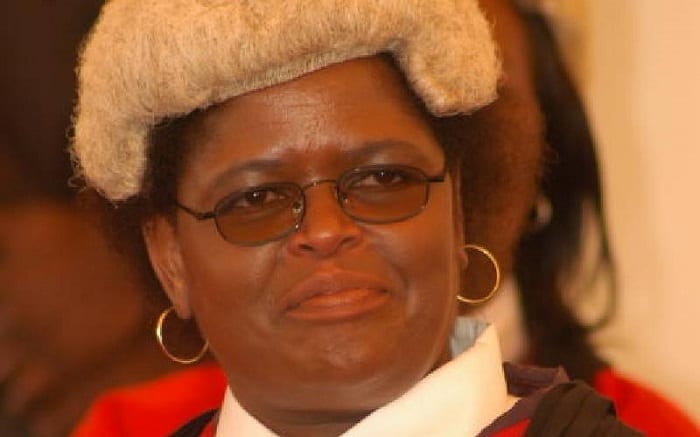 Her name will be forwarded to President Uhuru Kenyatta for transmission to the National Assembly for vetting.

The Judicial Service Commission (JSC) announced on Tuesday that Koome, 61, emerged the best candidate out of the ten applicants for the position.

The announcement was made by JSC Chairperson, Prof. Olive Mugenda, in a brief address to journalists on Tuesday evening.

Her confirmation came barely hours after the Court of Appeal overturned a lower court’s ruling, which had barred the JSC from announcing the CJ contest winner pending determination of a petition.

Four petitioners had moved to court and successfully stopped the JSC process, arguing all the ten CJ seat applicants had not submitted their wealth declaration forms as required.

Martha Koome was up against legal giants, among them scholars, judges and seasoned lawyers.

In 2016, Koome took a stab at the Deputy Chief Justice position, but wasn’t successful.

After she went for the CJ seat – this time around – Koome is a single confirmation away from becoming Kenya’s 15th Chief Justice.

During her interview, held on April 14, Koome was asked to imagine the challenges she would face if chosen Kenya’s first female Chief Justice, and illustrate how she would manage them.

In response, she said: “I believe the challenges are similar whether a male or female CJ. It will be historic for the Commission to nominate a woman for the Office of [the] Chief Justice. Leadership is gender-neutral. It doesn’t require a man or woman. It is skills that will deal with the challenges we face. You need managerial skills because you will be overseeing various things. As a lady, I appreciate that everybody brings something to the table.”

On cases taking ages in court, she said she would introduce a case management system that would guide judges and magistrates on which cases to exclusively handle.

“This (Backlog of cases) is a problem and it needs to be solved immediately. Back then, we were few [magistrates and judges] but somehow we managed. Now, we are many, but cannot manage [to clear the backlog]. What needs to happen is for every judge to have their own docket. We need a case management system,” she said.

Koome was also put to task to explain how she would handle the impasse created by President Uhuru Kenyatta’s alleged refusal to swear in 41 judges over alleged integrity issues.

“This [stalemate] must be resolved through negotiations. We are independent as Judiciary and nobody should attempt to take our dependence. Therefore, when the right hand doesn’t agree with what the left hand is doing (Kenyans), the body suffers. When I look at the Judiciary, we are inter-dependent as far as delivery of service is concerned. Where do we come together? We will hold regular meetings with the Executive and Legislature to end the stand-off. We must discuss this issue of the appointment of 41 judges with the President, find out where the problem is and resolve it,” she said.

Judge Koome was admitted to the Bar as an Advocate of the High Court in 1986 and started as a legal associate at Mathenge and Muchemi Advocates until 1993, when she opened her own law firm and became the managing partner until 2003.

During her time as High Court Judge, between 2003 and 2011, Koome served in different capacities as the Head of Environment and Land Division in Nairobi, Resident Judge in Nakuru and Kitale, and at the Commercial and Family Divisions in Nairobi.

She was also a Council member in the Law Society of Kenya (LSK) under CJ Willy Mutunga’s tenure and was associated with the promulgation of Kenya’s 2010 Constitution.

The United Nations (UN) gifted the Appellate Judge on October 2020 with a runner-up award as UN Kenya Person of The Year 2020, in recognition of her advocacy for the rights of children in conflict with the law as well as child victims.

The Award is presented annually to commemorate UN Day on October 24 and honour an individual or an institution for succeeding to bring to public notice significant issues related to the Sustainable Development Goals.

Justice Koome was a well-known face in the civil society movement before being appointed a High Court Judge in 2003 by former President Mwai Kibaki.

During her interview by the Judicial Service Commission in September 2016 for the position of Deputy Chief Justice, Koome was hard-pressed by commissioners to explain how her past would impact on her job.

She defended her past engagements in civil rights for women and children, saying she would not favour anyone. “The inner me sees no gender when handling cases touching on male or female rights. I have distinguished myself as defender of human rights and leadership in upholding constitutionalism without regard to particular gender,” she told the commissioners.

In support of her application for the CJ’s position, Koome attached five writings that constitute major judgements she has delivered while at the Court of Appeal bench.

Among the major judgements she cited was the case where the High Court had stopped the Communication Authority of Kenya (CA) from developing and installing a Mobile Document Management System (DMS) to tap and eavesdrop on people’s conversations.

Koome, alongside Appellate judges William Ouko and Daniel Musinga in April 2020 overturned the High Court decision allowing the Authority to continue developing the DMS on condition that they consult the public and other stakeholders.

Her second cited writing is a case where she sat on a bench that upheld that the Teachers Service Commission (TSC) has a duty to ensure all learning institutions are safe, with proper guidelines so that teachers do not subject students to sexual harassment and defilement.

She presented an essay she prepared for Court of Appeal in October 2020 concerning sentencing of capital offenders following the Supreme Court abolition of the mandatory death sentence.

In her last interview, the judge said her vision would be to fight corruption in the Judiciary and to reduce backlog of cases by introducing an electronic system of filing and monitoring cases.

Suspect to be charged over Muchai murder

Two Kenyans appointed to the ICAEW advisory board

What Photoshop can do: Uhuru and Kibaki in one