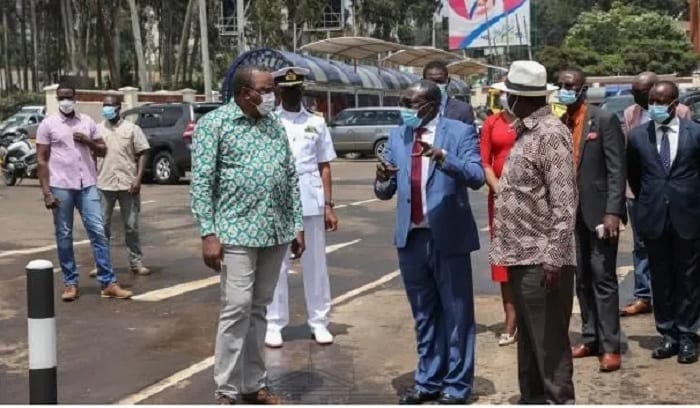 This trip comes just a day after the former Prime Minister was declared Covid-19 negative after battling the disease for three weeks.

In the video seen by Kenyans.co.ke, the two leaders were guided through the tour by engineers handling the construction of the terminus.

While at the venue, the president was shown the translucent waiting bays and informed that a supermarket, as well as a health center, would be put up at the park.

“This will be a restaurant, will also have a supermarket, we are sourcing people who want to investment.

VIDEO: General Badi Reveals How He Sneaked Uhuru To Mukuru…

“We will have waiting rooms and the screen with information will be in this room. There will be a public address system like the airport,” explained an Engineer to the President.

“We thank you as the business community here for accommodating us despite the construction. The NMS has given us a temporary relocation site where we hold fort as construction is ongoing,” stated one attendee.

Once completed, the park is expected to accommodate over 180,000 comutters on a daily basis.

The two leaders were also show the new technology that that would be linked with users mobile phones to notify them when their rides are due.

Green Park Terminus was the first stop in the two leaders’ tour of various projects in Nairobi. The building is expected to have at least 86 business outlets.

Raila in crisis talks to save Ababu

Up in the sky-The Lord is my shepherd