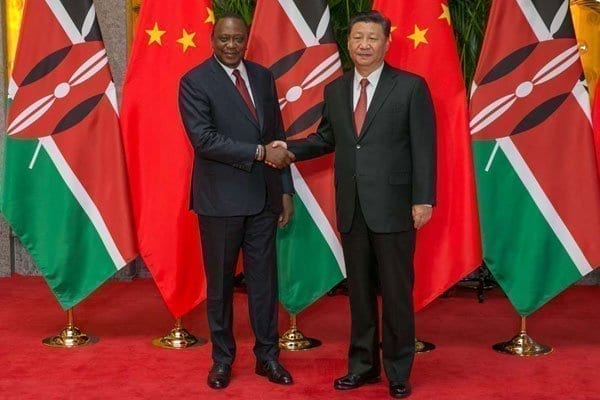 China’s business dealings in Africa are raising eyebrows. The Asian giant has in the past decade or so been involved in several multi-billion shillings projects on the continent, amid reports of kickbacks, a lack of accountability to a certain level and high interest rates passed on to the struggling African economies.

This has left many African countries in debt. Kenya has not been spared the debt wagon.

A recent debate on whether the Standard Gauge Railway (SGR) project which was built by the Chinese has proven value for money thus far best highlights the growing concerns.

Here are some of the African countries that heavily owe China billions of shillings.

1. Angola – It is the most indebted African country, as per the African insider, with an estimated debt of $25 billion (about Sh2.5 trillion). The Southern African nation has appeared to struggle to pay off this debt, and there are reports most of the sales from its oil are channeled towards repayment.

2. Ethiopia – The Eastern Africa country comes in a distant second on this list, with a reported $13.5 billion debt (Sh13.5 trillion) Most of these monies were channeled towards funding infrastructure projects towards one of the continent’s most populous nation.

3. Kenya – Kenya is third, with about $7.9 billion (about Sh800 billion) owed to the Chinese. Most of these loans were accessed during President Uhuru Kenyatta’s regime amid reports a huge chunk of the monies were lost to corruption. Further reports suggest the country, considered an economic giant in Africa, has struggled to pay off these debts.

4. Republic of Congo – Next is the republic of Congo with a $7.5 billion (Sh750 billion) bill. It is reported that corruption has played a major role in the escalation of the debt to such levels.

5. Sudan – Makes the list in fifth place. The conflict-torn country has an estimated debt of over $6.4 billion (Sh640 billion).

6. Zambia –  Just like Kenya, China has sponsored a lot of projects in the landlocked country and this has left it with a whopping $6.5 billion (Sh650 billion) debt to repay.

7. Cameroon – The West African nation’s $5.5 billion (Sh550 billion) bill places it 7th on the list. It was recently revealed that China was in talks to cancel part of this debt.

8. Nigeria – Nigeria owes China $4.8 billion (Sh480 billion) with the ties between the two countries so deep that the African nation has accepted the Chinese Yuan as a reserve currency.

10. The Democratic Republic of Congo – The war-town country completes the top-ten lists of countries that owe China at $3.4 billion (Sh340 billion). China has reportedly asked for precious natural resources and minerals in exchange for the cash.