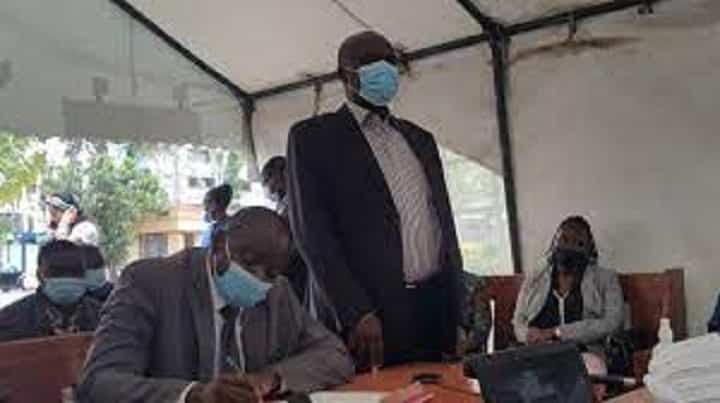 A Kenyan  lawyer Philemon Morara Apiemi has been charged jointly with a tycoon for allegedly defrauding heirs of a deceased couple their business empire valued over Sh100million.

He is jointly charged alongside Shahdadpuri Chanshymam Choithram who failed to attend court to plead to 13 counts preferred against him by the Director of Public Prosecutions (DPP).

A defence lawyer told court that Choithram contracted Covid-19 and has been advised to remain in isolation.

The lawyer presented to the court through state prosecutor Angela Fuchaka a medical report from Aga Khan Hospital about the status of Choithram.

“I will produce Choithram in court after 14 days to plead to the charges but Morara can take plea since he is before court,” the lawyer said.

Choithram and Morara are charged that while purporting to be director and external lawyer for Global Apparels Kenya (EPZ) Limited-GAK (EPZ) Ltd respectively, they conspired to defraud heirs of Suresh and Narain (both deceased) shares in the company.

The two are said to have defrauded 250,000 ordinary shares valued at Sh25million and 750,000 preferential shares valued at Sh75million by allegedly falsifying resolutions, transfer deeds, and statutory declarations of GAK (EPZ) Ltd.

Morara and Choithram are charged with unlawfully making a transfer deed on June 18 2018 purporting it to be a genuine one signed by the late Suresh Lakhian and Narian Choithram Shahdadpuri.

On December 5 2016 , Morara allegedly prepared the transfer deed being the lawyer for GAK(EPZ) Ltd.

He was also charged with making a Statutory Declaration dated September 6, 2017 purporting to have been sworn by Narian.

He is also accused of making another Statutory Declaration dated October 14 2016 sworn by the late Suresh.

Morara denied that he presented the forged written resolution, statutory declarations dated October 14 2017 and the transfer deed dated December 5, 2016 to the Registrar of Companies at the Attorney General Chambers.

On July 13 2019 Morara allegedly presented to the company registrar the forged statutory declaration dated June 7 2017 and the transfer deed dated June 13 purporting they were genuine.