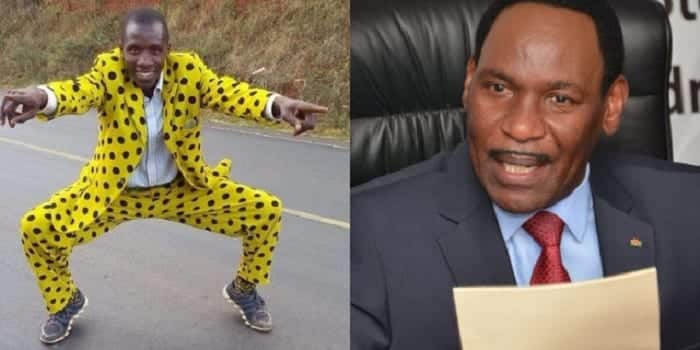 Gospel singer Christopher Mosioma (popularly known as Embarambamba) has explained his side of the story after a video of himself performing what has been described as not-so-decent acts in what appeared to be an entertainment joint found its way to social media.

In the 18-second  video, the musician who’s known for his unique dancing styles including one where he rolls severally on the ground is spotted ‘going down’ and widely dancing with the woman.

Another video showed him dancing with a man. The singer is seen lifting the young man from the video as he showcases his gymnastics moves before putting the man on the dance floor and humping on him.

The content in these videos has got him in trouble with the Kenya Film Classification Board (KFCB) chairperson Ezekiel Mutua who termed it ‘gross.’

Embarambamba. . .that’s gross
You have crossed the line!

The singer has since come to share his side of the story, claiming he went to the nightclub to save people ‘the way Jesus did’.

“I’ve been abused, and my fans are very angry with me. I want to explain that Jesus came to save the lost, so I was interacting with people at the club. That is because He wanted them to know Him. God bless Kenya,” he added.

Mutua, commonly known as the ‘Moral Cop’ has previously shared his concerns with the musician content, explaining he could be a danger to himself.

“Is this style sustainable? Is it even sane? Unless he’s superhuman, this guy will hurt himself. Someone, please stop him!” Mutua posed.