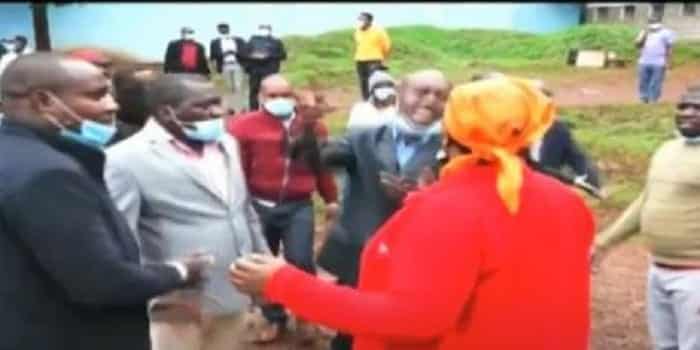 A fistfight broke out in Murang’a county when two opposing groups of youth encountered each other over the BBI vote.

In a video seen by Kenyans.co.ke, the two warring factions clashed in Murang’a town with supporters of Kiharu MP Ndindi Nyoro and Murang’a Senator Irung’u Kang’ata who voted ‘No’ during the respective votes in the Houses of parliament taking to the street.

A group of youth against the ‘NO’ leaders also gathered when word went around that they were planning protests.

They labelled the leaders who voted against the Building Bridges Initiative (BBI) as traitors.

A shouting match ensued and later turned physical as the group allied to Nyoro and Kang’ata had the placards they were waving destroyed.

Police had to intervene to separate the two groups as some of the youth were injured in the melee.

The Senate on Tuesday, May 11, voted to pass the Constitution Amendment Bill 2020.

Out of the votes, 51 senators voted for the bill, 12 voted no while one abstained. Kang’ata was among those who voted No in the sitting.

Days prior, the motion passed by a simple majority in the National Assembly as required for a constitutional amendment bill introduced by a popular initiative.

National Assembly speaker Justin Muturi announced that 235 MPs voted yes while 83 voted no and two abstained. The total number of votes cast was 320. Nyoro was one of the MPs who voted against the bill

A surprising vote was that of Bahati MP Kimani Ngunjiri who voted for the approval of the amendment.

With both Houses passing the bill, it will now proceed to the referendum process where Kenyans will get a chance to either vote yes or no.