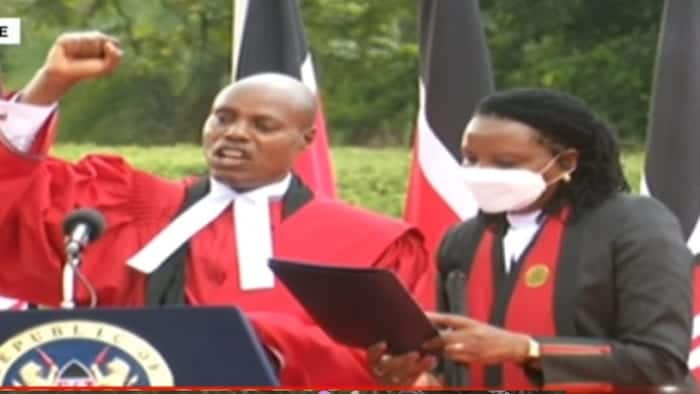 Laibuta was promoted to Court of Appeal Judge after Uhuru accepted his proposal fronted by the Judiciary Service Commission (JSC).

“I Imaana Laibuta, Judge of the Court of Appeal do solemnly affirm in the name of the Almighty God to diligently serve the people and the Republic of Kenya to solemnly do justice in accordance with the Constitution as by law established.

“Without fear, favour, bias, affection, ill will or prejudice or any political, religious or other influence in the exercise of all Judicial functions entrusted to me,” he swore, adding that he will defend the Constitution.

Day of Judgment: BBI was not a Wanjiku process, Justice…

Laibuta lost his sight at age 22 while in his first year of university studies. According to him, this was purely a medical accident.

“I got treated for malaria, got treated with Chloroquine, got Chloroquine poisoning and my sight went in two hours. The first thing you are confronted with is shock unless the loss of sight is gradual and you know it is coming. When it is a sudden loss of total sight, you are thrown into shock, confusion, you are derailed from your normal course in life; be it school, college, work etc.

“The bitterness was more due to the fact that the medical personnel had no idea what was going on. Some consultants would say, “Oh no, this is just temporary, it will wear off in a year or so.” So you are like a guinea pig in a hospital for a month and 10 days undergoing all manner of tests. Eventually, I left the hospital not knowing what had happened. But what I know for sure is that it came out of that treatment,” he said at a past interview.

The judge is also a part-time golf player.

Prior to his promotion, Laibuta served as a commissioner at the Commission for the Implementation of the Constitution (Kenya). He is a Chartered Arbitrator (CArb) and Fellow of the Chartered Institute of Arbitrators (FCIArb).

The Professor has served as the advocate of the High Court of Kenya for  26 years. He is also a Law Society of Kenya continuous legal education (CLE) facilitator in arbitration.

He was also a law lecturer for 24 years, and an approved tutor and trainer, examiner, moderator and assessor for the Chartered Institute of Arbitrators.

Outside Kenya, Laibuta served as the Chairperson of the management board of the Kenya Chapter of Voluntary Services Overseas [VSO-Jitolee (EA) Volunteering], a member of the executive council of the Kenya Society for the Blind and Chairman of the Education and Rehabilitation Committee.

The Appellate judge has co-facilitated numerous consultative workshops, seminars and conferences organized by the IDP Africa Forum, UNDPK, the Kenya Society for the Blind and the Law Reform Commission on the UN Convention and domestic legislation on the rights of persons with disabilities.

In Botswana, he worked with the World Health Organisation (WHO) and the Government of Botswana (Ministry of Health) for the development of the National Policy on Disability. Laibuta has a Doctor of Philosophy (PhD) in Law, University of Nairobi, School of Law (2009- 2012)

A Master of Laws (LL.M.) London School of Economics (University of London), a Post Graduate Studies from Kenya School of Law and Post Graduate Diploma in Law. He is also a trained mediator as he studied Alternative Dispute Resolution at the University of California, US.

“Let your actions and decisions be guided solely on unbiased and faithful application of the constitution and our written laws; our principles and values as a nation; and the overriding interests of justice,” Uhuru told Laibuta at his swearing-in ceremony.