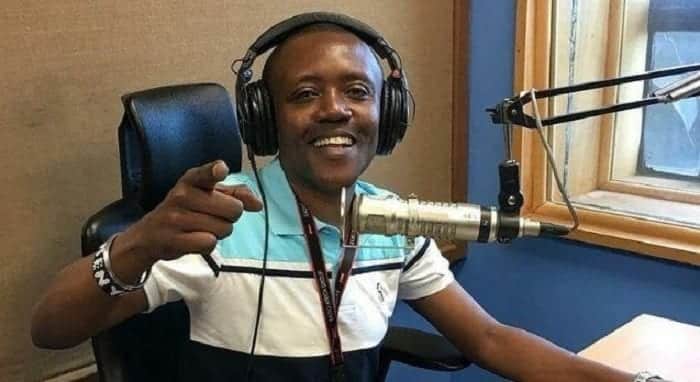 Classic 105 radio presenter Maina Kageni revealed that he had insured his voice for Ksh 100 million during a breakfast show on Friday, June 11.

During the show, his co-host Daniel Ndambuki (Mwalimu King’angi), joked about Kageni’s career coming to an end if he lost his trademark voice.

In a rejoinder, however, Maina told the comedian that he had insured his voice.

“If I lost my voice today, I would be paid a total of Ksh 100 million… have you not insured your voice?” he posed as the two laughed.

He further encouraged King’angi to also insure his voice.

Maina and Kin’gang’i is one of the most listened to breakfast shows in the Country. The show tackles social issues especially relationships.

The media personality, whom many have come to love and admire, has on previous interviews disclosed that he landed his first radio job by sheer luck.

In 1996, he had just flown back into the Country from the UK when he approached Capital FM looking to advertise a product.

On reaching the station, he was asked for Ksh40,000 for the voice over and since he did not have the money, he said he would do it.

The bosses at Capital FM loved his voice and that is how his radio career begun. A few months of working at Capital, he was poached by Nation and later by Radio Africa where his salary tripled.

Being one of the most known and loved radio personalities as well as an emcee, it would be tragic to lose his voice and is only prudent to insure it.