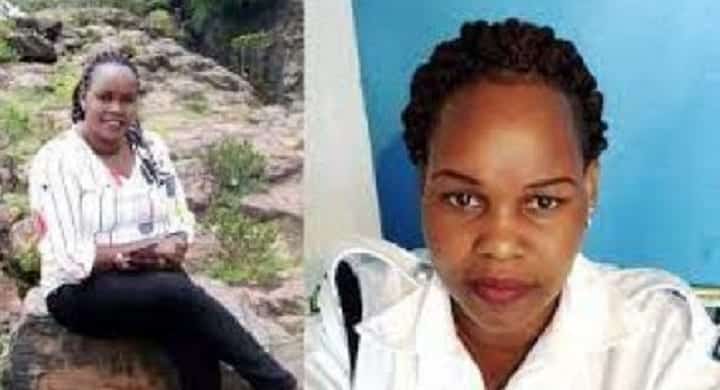 Caroline Kangogo, the prime suspect in the murder of two suspected men including a police officer, has sent a chilling message to her estranged husband, a senior police officer attached to the Maritime police unit in Mombasa.

Reports indicate that Kangogo stated that her husband would suffer the same fate as her victims. The duo has sired two children together, aged 8 and 11.

Detectives privy to the investigations have revealed that Kangogo is hunting her lovers and leaving a trail of bodies in her wake.

The police affirmed that they are tracking her every trail in order to nab the suspect.

Further, close colleagues of the suspect have intimated that she loved partying and would occasionally be found in most social joints within Nakuru county.

“I think anyone who has gone to popular joints within Nakuru CBD has come across her. She is social though quick to anger,” a colleague who sought anonymity stated.

Kangogo is also believed to have been in constant communications with wanted criminals.

“A majority of her acquaintances are not aware that she has a family. I once arrested a man who was shocked to see her in full police uniform at the station,” another colleague affirmed.

The female police officer has been on the limelight for the past week after reports emerged that she was the prime suspect in the murder of Constable John Ongweno inside Kasarani police station in Nakuru on Monday, July 5.

This led to police launching investigations in order to uncover her hideout. However, 24 hours later, she struck again when reports came out that she shot dead another man identified as Peter Ndwiga at a hotel in Juja.

Known for her skills on the shooting range, police have urged the public to be wary of the suspect as she is believed to be armed and dangerous.

“We are cautioning members of the public, especially men, to be on the lookout for the rogue officer, who is luring men to her trap before executing them in cold blood,” DCI boss George Kinoti stated.

Corporal Carolyne Kangogo, 34, has been on the run since the death of Constable John Ogweno. Ogweno’s bullet-riddled body was on Monday found inside his car at the Kasarani Police Station in Nakuru.

As she runs, Corporal Carolyne Kangogo is leaving a trail of dead bodies behind her. On Monday, she is said to have killed Peter Ndwiga. Peter’s body was found at a hotel room in Ruiru. Preliminary investigations show that the two had booked room number 107 at Hotel Dedamax at 4pm on Monday where they spent the night.

“Police officers rushed to the scene where it was established that a man and a lady booked room on July, 5, 2021 at 4:22pm. The body of the man was found to have a bullet wound on the head, and one empty spent cartridge of 9mm was found in the room. One wallet containing an ID card with the names Peter Ndwiga, 32, and car keys with a holder written Toyota Probox KDB 506U were found in the pockets of the deceased,” a police report said.

CCTV footage shows Carolyne in a yellow hoodie leaving the hotel. Another screen grab of the footage obtained from cameras at the VIP lounge show Carolyne walking into the hotel with a man who was wearing a burgundy pair of trousers and a grey coat.

Promotion To Glory Of Peter Kamau Njaga Of Woodstock, GA