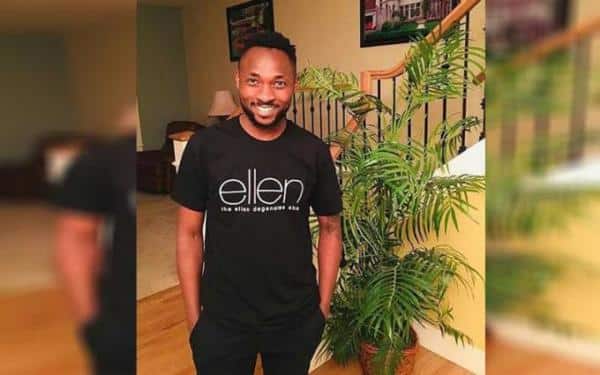 Former Churchill show comedian, David Kangogo, popularly known as David The student, has found himself in hot soup after several Kenyans came out accusing him of allegedly conning them.

Speaking to media, one Grace Mboya has filed a report with the Lang’ata police asking for his arrest. According to the complainant, the comedian obtained Sh188,650 from her under false pretenses and has failed to pay her back.

‘’He borrowed the money in July last year and for some time now, I have been chasing him for it. I even gave him a repayment plan of Sh20,000 for 10 months but he still did not honor it,’’ she told the reporter.

Giving his side of the story, David the student presented himself to the police station insisting he owes her no money after a deal the two were involved in hit the fan.

‘’I was called to Parklands Police Station where I went with my lawyer. She was told she (Grace) has no case. I don’t have her money. We were organizing an event to take Diamond Platnumz to Eldoret for a concert. It was a two-way arrangement in which i also lost money because the event did not happen, it failed,’’ he said.

His woes were only but beginning.

One Kenyan living in the US by the name Njoroge Frank took to Facebook exposing the comedian for allegedly conning innocent Kenyans.

‘’Red alert my diaspora people. I want to notify you of a con man who has given some of us a head time here in the diaspora…comedian ‘David the Student’’ from Churchill show is a real con man.’’ part of the post read.

Upon being reached out for a comment by a local tabloid, Frank revealed that he hosted David The Student for the first time when he traveled to the states to audition for America’s Got Talent.

‘’He called me last year, told me he got my number from Jaguar. He was coming for America Got Talent interview, I did it coz of Jaguar, Jaguar is my boy,’’ said Steven Mbugua.

Organizing several comedy shows for the comedian alongside Butita and Njoro, the trio were to perform in Boston, LA and Minneapolis.

But according to a local news site, more complaints of the comedian conning other Kenyans arose after about 10 people approached him (Steven) with the same. It was at that point he decided to fire the comedian.

‘’I told him you have not changed at all, you are no longer part of this tour. I called the organizer in Boston and told him David will no longer be performing there because he has been conning people,’’ Steven said.

“About 10 people personally came to complain, I don’t know who else he has conned,’’ he added.

Shukran Kenya Diaspora advisory of Texas! Had so much fun!

According to one Arap Rotich who to social media in defence of the comedian, the accusations are baseless. Rotich claims that the accusers are the ones who owe the comedian money.

“My earlier shared post on David Kangogo has received both negative and positive reactions.’’ he posted.

“I spoke to him, Kip Kip Siratei, and Victor Murgor. After listening to his side of the story it’s now apparent that #NjorogeFrank, #MikeMwehrsSnr and #StevenMbuguo claims of being conned are baseless. They provided half-truths on the matter while in real sense they owe David Kangogo some money, they failed to pay the guy the agreed amount for the shows in Las Vegas, Seattle and elsewhere…a lot of money for that matter, besides emotional torture, neglect and spiritual abuse. They need to come out clean and clear this mess. If your claims are valid #NjorogeFrank and co. Why do you keep deleting and blocking those who question validity of your claims? Kangogo probably has his own issues but my focus is now on these 3 musketeers from Seattle, and LA. These characters: Looks like #NjorogeFrank is a liar he has blocked me and deleted the thread. I am glad I shared and questioned otherwise we would have never known the other half-truth!!’’ The post read.

As the saga continues to unfold, David is yet to make any official comment with regards to the unfolding reports.

Efforts to reach the comedian bore no fruit.