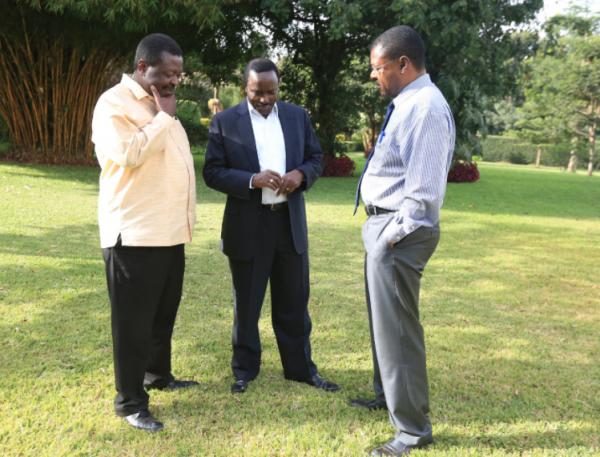 The One Kenya Alliance principals on Tuesday  were split on whether they can reunite with ODM boss Raila Odinga in a formidable force to face Deputy President William Ruto.

The Star has established Ford Kenya leader Moses Wetang’ula and Kanu chief Gideon Moi both agreed they had no problem teaming up with the former Prime Minister.

However, signalling deep-seated political rivalry, ANC leader Musalia Mudavadi and his Wiper counterpart Kalonzo Musyoka insisted they could only accommodate Raila if he plays second fiddle.

But Raila wants to be president.

It is understood the Oka technical committee — the think tanks driving the nascent alliance — boldly asked the quartet to retreat and hammer out a deal on the Raila question.

“Raila is the elephant in the room. We agreed the principals retreat on their own and resolve the issue,” an official who attended the OKA meeting said. He spoke on condition of anonymity.

The official went on, “Weta and Gideon have no problem with Raila. What they are saying is he should come with open hands and free time to engage.”

Ironically, President Uhuru Kenyatta has asked them all to unite and promised to back one of them.

However, Uhuru and his handlers have quietly settled on Raila as the best bet to beat Ruto.

Oka’s differences could jolt President Uhuru Kenyatta’s plans to form a broad-based political alliance to take on Ruto in next year’s general election.

Ruto’s strategists fear a failure to bring together the opposition leaders could hand Ruto an easy ride to the presidency.

Politicians and analysts have warned that with the Oka principals playing hard ball with Uhuru, the President could explore other options, including reuniting with his estranged deputy.

Nairobi Senator Johnson Sakaja, a new associate of Musalia, said Nasa chiefs should sort out their differences and team up again.

“Raila is a respectable leader. He has the following and if indeed they are  able to agree on those issues of trust, then it would be good to have him,” Sakaja told the Star.

In a statement released after the meeting, Wiper, ANC and Ford Kenya said they will not go back to the moribund Nasa coalition as part of their 2022 plans.

“On matters of the National Super Alliance, we — Ford Kenya, Wiper and the Amani National Congress —wish to reaffirm our irreversible commitment to the One Kenya Alliance in partnership with Kanu and any other like-minded Kenyans,” they said.

The strongly worded statement appeared to dash any hopes of the Nasa chiefs reuniting as part of President Uhuru’s 2022 succession game plan.

“As far as we are concerned, Nasa is part of our political history. All that remains is the final process of closure which includes financial accountability and settlement,” the trio said.

The meeting also discussed the thorny issue of identifying a presidential flag-bearer when each principal wants the job.

It is understood Kalonzo told the meeting that they should follow “seniority” and the ability of every principal to deliver his backyard and rally other regions.

Kalonzo has had Ukambani solidly behind him since 2007. Musalia has never managed to consolidate Western.

However, Musalia insisted that they adopt a scientific method to arrive at a candidate.

At a press conference after the closed-door meeting, Kanu said it would initiate the process to move out of its partnership with Jubilee as part of the move to formalise the Oka coalition.

The law does not allow a political party to be in more than one coalition.

The hardline positions taken by the One Kenya principals against Raila —who is believed to be Uhuru’s preferred choice for successor— has put Uhuru in a tight corner.

The One Kenya alliance now becomes the hardest nut to crack for Uhuru in firming up his succession plan that seeks to block Ruto’s ascendancy to the top seat.

On Tuesday, former Cabinet minister Franklin Bett said the President has found himself in an awkward position in trying to craft a winning formula.

“He shouldn’t have been pushing for a united opposition especially when that coalition did not sponsor him to power. He is in an awkward position where he should not have been,” Bett said.

Former Cabinet minister Musa Sirma said the Nasa chiefs will suffer at the hands of Ruto if they refuse to unite and field a joint presidential candidate next year.

“Their strength is in their unity,” declared the former Eldama Ravine MP, adding that a strong and united team of the Nasa chiefs remains the most viable option to beat the DP.

There appears to be no clear challenger for Ruto who is aggressively traversing the country and positioning himself as the most formidable candidate in the race to succeed the President.

Analysts have argued that Uhuru has at least five options including reuniting with Ruto — a man he has vilified — if the unity bid comes a cropper.

There is a feeling within Uhuru’s camp that Raila is the best bet to succeed the President when he retires next year as he could help secure the President’s legacy.

The ODM boss, although he has no formal role in the Jubilee government, wields immense power and has a larger-than-life influence, putting him ahead of the pack.

Although Raila is yet to formally declare his 2022 ambitions, he  has unveiled a robust economic transformation agenda, signalling he could be on the ballot with a “magazine and not just one bullet”.

On Tuesday, Tongaren Eseli Simiyu said the President’s push for a united opposition would backfire, saying each of the principals is pursuing selfish interests.

“The President is between a rock and a hard place. The One Kenya Alliance partners whom he wants to work with Raila are like a wheelbarrow, they cannot move.”

Simiyu said the President made a big political miscalculation to push for unity of the Nasa chiefs before the partners could agree to work together on their own.

“This was a big mistake. He (Uhuru) could have allowed them (Nasa) chiefs to unite first before asking them to work together in his 2022 succession plan,” Simiyu said.

ANC deputy party leader Ayub Savula says the Nasa chiefs have a better chance of vanquishing Ruto next year if they unite to support Musalia whom he said would attract goodwill across the board.

“Individually, Raila, Musalia, Kalonzo and Wetang’ula are fairly strong politically, but they are stronger as one. And if we don’t get our act together, Ruto will emerge victorious with ease,” Savula said.

Because Raila is feared by voters in that region and Kalonzo attracts less backing than Musalia, we are better off with a Musalia candidature. He is the only one who can stop Ruto from becoming president,” he said.