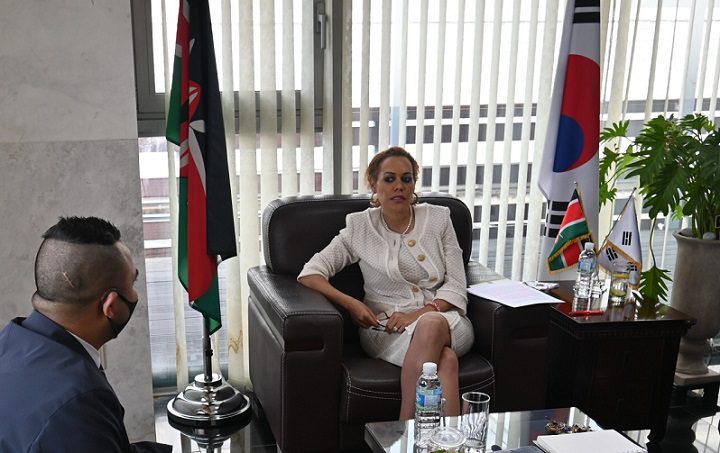 The priority areas under Kenya’s Vision 2030 and its Big 4 Agenda — food security, universal health care, affordable housing and industrialization — provide a solid foundation for trade and investment for South Korean companies, according to Mwende Mwinzi, Kenyan ambassador to Korea.

In an interview with The Korea Herald, Mwinzi said the grounds for advancing bilateral relations were laid in July during a visit to Korea by Betty Maina, Kenya’s Cabinet secretary for industrialization, trade and enterprise development.

“Despite the resurgence of fourth wave of COVID-19, Kenyan government did not reduce its delegation, and the Korean government worked to ensure processing attests bilateral commitment to deepen ties between Kenya and Korea,” Mwinzi said.

Mwinzi said coffee was Kenya’s biggest export to Korea and that the Kenyan government was streamlining the coffee sector so that small farmers could be supported in producing and marketing beans that satisfy global demand.

The envoy said the establishment of the Nairobi office of the Korea Infrastructure Cooperation Center in 2018 would expand cooperation, and she outlined other areas where both countries could benefit from further collaboration.

“There is a need to cooperate on mechanizing the agricultural sector to secure food, enhance the supply chain, enter the market space of food processing and value addition and develop the biopharma industry to produce medical equipment and adopt new technology for constructing decent and affordable housing,” she said.

She said Kenya-Korea economic relations presented Korea with an excellent opportunity to capitalize on the African Continental Free Trade Area — the largest free trade area in the world in terms of the number of participating countries, affecting 1.3 billion people across 55 countries with a combined GDP of $3.4 trillion.

“Logistically and otherwise, Kenya is a gateway to facilitating intraregional trade that includes road and rail networks, regional trade corridors including the north corridor and LAPSSET, and increased capacity at the port of Mombasa and Lamu Port,” Mwinzi said.

LAPSSET stands for the Lamu Port and Lamu-Southern Sudan-Ethiopia Transport Corridor, a transport and infrastructure project spearheaded by Kenya.

The ambassador said most Koreans were unaware of Kenya’s strengths as an investment hub with a stable environment and an English-speaking workforce.

The envoy said she hoped many supply chain and market access issues would be addressed in August at the sixth meeting of the Kenya-Korea joint economic cooperation committee.

Mwinzi said the Kenyan Embassy in Seoul was in consultations with Kenya Airways in hopes of establishing direct flights between Nairobi and Seoul, which would fill the gap left by the cessation of direct flights by Korean Air in 2014.

Pointing to the international recognition Korea and Kenya had received for their disease control efforts during the pandemic — both Korea Disease Control and Prevention Agency Director Jeong Eun-kyeong and Kenya’s Health Cabinet Secretary Mutahi Kagwe have been called “unsung heroes” — the ambassador touched on the issue of vaccine production.

Saying that both countries placed health care and universal health care coverage at the cornerstone of their development blueprints, she praised Korea’s investments in biopharma and its impressive leaps in manufacturing the COVID-19 vaccine in collaboration with international pharmaceutical companies.

“Kenya is desirous of emulating self-sufficiency of Korea and welcomes Korean companies to partner with Kenya in building vaccine and R&D manufacturing capacity,” she said.