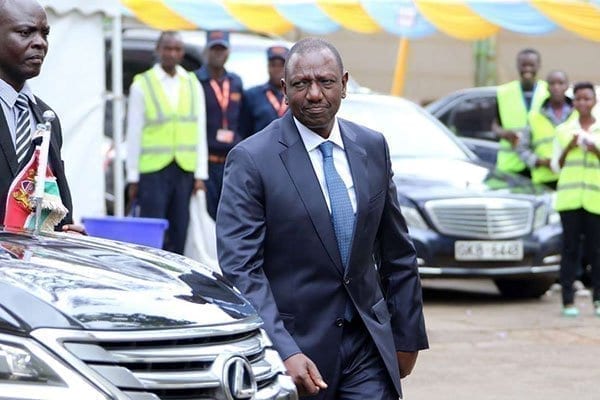 Five drivers who are attached to the Deputy President William Ruto have been withdrawn. The drivers are also trained police officers.

Speaking to K24 Digital, Emmanuel Talam who is DP Ruto’s spokesperson said that those who had been withdrawn are police officers who were attached to the transport team.

“Those who have been withdrawn are five trained police officers who are in the driving team.

“However, three of the recalled drivers have already been told to get back to work by Monday,” he told K24 Digital.

This comes just a day after officers drawn from the General Service Unit (GSU) who have been guarding Ruto’s official residence in Karen were withdrawn and replaced by those from the Administration Police (AP).

K24 Digital has established that the officers arrived at DP’s Karen residence in two vans, held a meeting with their GSU counterparts before heading to his Hardy home and did the same.

The move prompted the DP to seek explanations from Inspector General (IG) of police Hillary Mutyambai on why the GSU officers had been withdrawn.

Talam in his statement over the deployment and redeployment of the police in the home, a senior police inspector in charge of security at the DP’s Karen residence was called and directed to inform the security personnel that they were supposed to leave the residence by Thursday 2 pm.

The GSU officers reported back to their headquarters in Ruaraka located along Thika Road.

Mutyambai later issued a statement clarifying that the VVIP guards were not withdrawn but only reassigned adding that the Presidential Escort Unit continues to provide close protection security to the DP.

“The National Police Service through its various units is mandated to provide security to government buildings and critical infrastructure including security to VVIPs and their residences,” Mutyambai said on Thursday.