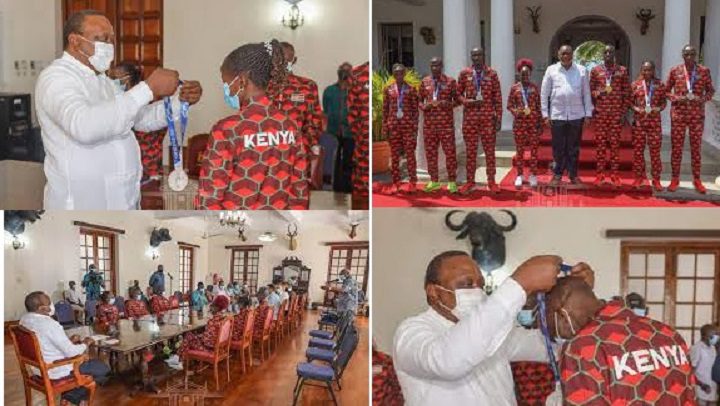 President Uhuru Kenyatta on Monday August 16, received representatives of the triumphant Kenyan contingent to the 2020 Tokyo Olympics at State House.

The Head of State further announced a uniform token of Sh 200,000 for all athletes and officials, including the Paralympics team, participating in delayed Summer Games.

The president thanked the Olympians for their outstanding performances that saw Kenya top the African medal chart, and challenged the sporting fraternity to ensure the country continues to excel on the global stage.

This gesture comes days after Kenyans on Twitter complained that the government seemed to have neglected the African champs upon their return.

Many Kenyans compared their reception to that of Uganda’s athletes who were received in a convoy of cars sent by President Yoweri Museveni.

He also announced that all the medalists would get a new car plus a monthly salary and a promotion for those in the security forces.

President Kenyatta’s reward is a standard token given to Kenya’s medalists but topped it with a Sh200,000 bonus for all participants.

The country had fielded a total of 85 participants; 37 men and 48 women.

This means that President Kenyatta has planned a Sh17 million kitty for the reward of the Kenyan champs.

Kenya’s marathon legend Catherine Ndereba told Pulse Live that while the International Olympics Committee is not focused on rewarding athletes with monetary tokens, the title goes a long way into shaping an athletes career.

“When an athlete wins an Olympics medal, they are now able to negotiate appearance fees at other events such as the world championships. One can be paid to participate in the other competitive events,” Ndereba said.

For instance, when the Boston Marathon calls Brigid Kosgei to participate in the next event, they will be talking to the current Olympics gold medalist, a title she can use to negotiate a fee. The appearance fee is separate from the prize money.

“The Tokyo Olympics was Kenya’s 2nd best performance and I am very proud of the whole team,” she praised.

Despite the controversies, Kenya left Rio 2016 Olympics with 13 medals (6 golds, 6 silver, and 1 bronze), marking its most successful outcome in Olympic history based on the medal position.

Museveni Rewards Olympic Medalists with cars and houses for…