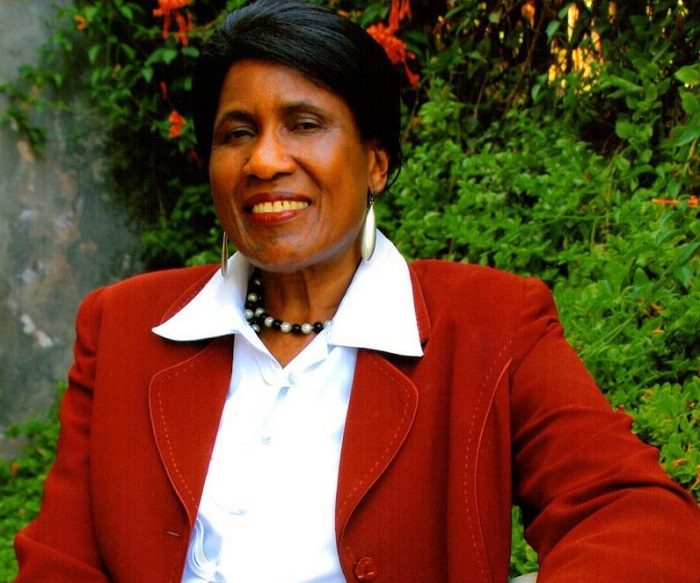 The Kenyan corporate scene has in the past been dominated by members of the male gender – mirroring many other sectors in society.

However, the proverbial glass ceiling is slowly but steadily being broken by trailblazing women who have worked hard to beat societal stereotypes and make a mark for themselves as respected entrepreneurs. And, of course, they have made a fortune along the way.

Kenyans.co.ke tells these stories to inspire and celebrate entrepreneurship and innovation.

The story of Mary Okello.

Born to one of the country’s most powerful, influential and brilliant families, she grew up to become an admirable entrepreneur with vast interests in the lucrative education sector.

Her family not only dominated politics, the medical industry, engineering and general trade and enterprises, it was also one of the most admired in all ways.

Most, if not all of the members, are of many firsts and feats.

In fact, Okello was the first woman bank manager in Kenya in 1977 and later the first African representative to the World Women Banking Organization in 1985. Now, do you see what I mean?

Okello was among 13 girls sponsored by the government to start her A levels at Alliance Girls’ High School. Here, she interacted with some of the best minds including; Lady Justice Effie Owuor, Prof Florida Karani, Elizabeth Wanjiru (of Citizen’s TV drama Mother-in-Law) and the late Elizabeth Masiga (the first woman chief inspector of schools).

After completing her studies at Alliance, Okello preceded to the Kenya Prisons where she trained and worked briefly as a cadet, acquiring a great skill in the handling of firearms.

Thereafter, she joined Makerere University to study for a Bachelor’s degree in history.

After she graduated from university, Okello briefly worked at the Ministry of Foreign Affairs. She, however, called it quits after ‘failing to consider herself diplomatic enough.’

She would then apply for a graduate trainee job at Barclays Bank but her application was rejected multiple times on the basis of being a woman.

She did not lose hope.

Okello kept sending her application and her tenacity finally paid off when she was contacted for the opportunity. At the bank, she rose up the ranks, becoming the first Assistant Manager and later bank manager in Kenya in 1977.

The entrepreneur saw the need to have women given equal opportunities, hence, formed the Barclays Bank Women’s Association. The association was meant to mentor women, equip them with knowledge and encourage them to challenge the status quo.

“Being a leader means being the voice for others as you have a privilege which they don’t,” she once told Parents magazine.

Later, Okello teamed up with other women and formed the Kenya Women’s Finance Trust (KWFT) to empower women financially.

In 1985, she left Barclays bank to be the regional representative and first African representative to the Women’s World Banking (WWB). She served in this position until 1987 when she was appointed to the Africa Development Bank as a senior advisor to the bank’s president.

In 1990, she was appointed the Vice-President of the Women’s World Banking based in New York. All through her career, Okello lobbied financial institutions to remove rules and regulations that were discriminatory against women.

In 1992, she took a sabbatical leave and eventually left her banking career to focus on Makini School which she and her husband had founded in 1978.

The school was founded by Okello and her husband Pius Okello under the name Riara Gardens Academy, before it was changed to Makini Schools.

The mother of three noted that she saw a need to start the institution following a drop in the standards of education.

“A class would have 70 or 80 students per teacher so we felt there was something that we needed to do.”

Okello earned nearly Ksh1 billion from the sale of a 71 per cent stake.

In 1968, when Barclays Bank sent Okello to London, she met her husband, the now late Dr Pius Okello.

At the time, Pius was studying for his doctorate degree in London.

“We became fast friends and got married in London. We were blessed with three children; Joseph Okello, Lawrence Okello and Clare Niala, who are now all married,” Okello narrated in a past interview.

Unfortunately, Okello lost her husband in 2004 through a road accident.

“It is an incident that remains the most painful experience I have gone through,” she stated.

Among awards that she has received is the Moran of the Order of Burning Spear (MBS) for her contribution to education in the country.

She attributes her success to her hardworking and God-fearing parents.

“My mother juggled several roles including teaching, midwifery and being a social worker, and my dad’s pioneering spirit in establishing churches, his courage and high principles in whatever he did remain admirable values to me.”

Is Matiangi the new prime Minister? Uhuru appoints him head of gov’t projects