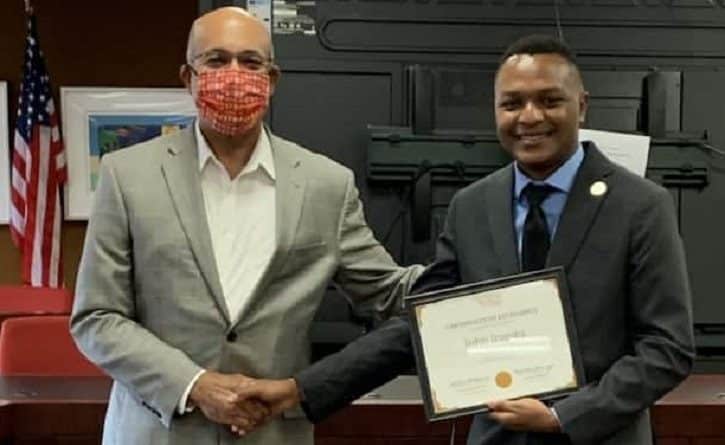 A Kenyan man John Gatambia Irungu was Elected Student’s President in The University of The District of Columbia, Washington DC.

The thirty-one-year-old John Irungu from Ol-Kalou in Nyandarua county is a young Kenyan flying the country’s flag high abroad.

This is after he was elected a student’s president in the University of the District of Columbia, the only public university in the heart of Washington DC. One thing that makes Washington special is that it is home to government institutions like the White House, Supreme Court, and Congress.

Speaking to TUKO.co.ke, Irungu said that his journey started at St Augustine Sirima primary school before he joined the University of Nairobi (UoN) for a bachelor of arts degree in Arts in Political Science and Government.

The enterprising young man went to the United States in 2017 to pursue a Master’s degree in Public Administration where he also worked with various government agencies.

In 2020, he enrolled for his second master’s in computer science to further his skills in reporting and data analysis, as well as got the job of Data Science researcher under a NASA-funded research grant.

While at UoN, Irungu took a stab at the student union leadership, SONU, but shelved his plans to become one of the advisers to former chairman Zack Kinuthia who is the current Sports, Youth and Culture CAS.

It was a venture that almost took him off-course as his studies took a backseat for a while before he got back on track. “I was too much in student politics and general merchandise supplies business that I nearly missed out on the plan to graduate at the right time,” he remembered. He was quick to admit that navigating career and academics increases the margin of error, adding that he has managed to rise to the top due to his resilience.

One thing that makes Irungu optimistic is that Kenya is slowly paving way for youthful leadership and ideas.

His only concern, however, is that the young leaders are yet to do enough towards enacting policies that better the social and economic welfare of their peers.

He cites the example of 31-year-old US Congresswoman Alexandria Ocasio Cortez who introduced the Green New Deal congressional resolution on climate change.

Irungu’s academic excellence and leadership acumen are yet another indication that Kenyans have what it takes to create ripples on the global scene. Perhaps, the one Kenyan whose name will remain embedded in the books of history for daring and winning abroad is former US president Barrack Obama.

Born of a Kenyan father, Obama rose to head the most powerful nation on the planet for two terms.