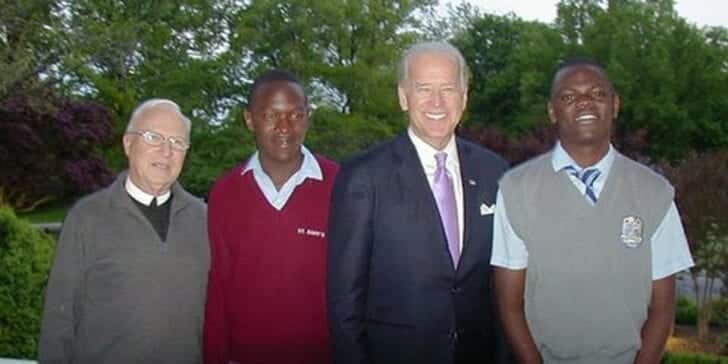 Imagine going from living on the streets of Nairobi to dining with the Vice President of the United States of America.

Former Vice President and 2020 Democratic Party presidential candidate, Joe Biden, is an icon to millions around the world. But Kenyan Nelson Gitonga says an encounter with him in the US in 2010 changed his life.

“Having spent many years in hopelessness and doubt about my posterity, I must confess that meeting Mr Biden greatly amplified my hope. I was among the least, the last and the lost. It was unfathomable that a person from my background would have such a moment in his lifetime,” he told the Nation.

Mr Gitonga is the founder of Shades of Hope Africa (SOHA), a mentorship organisation that focuses on at-risk children and youth as well as suicide prevention. He is also an author.

He attributes establishment of the organisation to his meeting with Mr Biden in 2010 when he was a student at St Mary’s Boys’ Secondary School and Rescue Centre in Nyeri County.

But his story and journey to the once-in-a-lifetime encounter started in 2000 when he lost his mother an ended up living on the streets of Nairobi.

“My family was very poor so when my mother died, we ended up on the streets scavenging for food. I lived on the streets of Nairobi for three years,” he said.

Together with his friends, Mr Gitonga was rescued by and enrolled in school by well-wishers. Through Glory Worship Center, he was admitted to Komaranch Primary School where he resumed his studies.

“My friend from the streets ended up in St Mary’s Boys Rescue Centre in Nyeri,” he said.

“My education sponsors felt it was safer if I moved to the school because it ran a programme that focused on children with similar backgrounds as mine. I fit right in,” Mr Gitonga told the Nation.

Besides being a faith-based private secondary school, St Mary’s runs a programme that focuses on rescuing vulnerable and street children and taking them back to school. The child rescue programme was started in 1999 by the late Brother Dominic Jordan, who was also the secondary school principal.”

The programme that offers shelter for vulnerable children runs alongside the secondary school, with the older students mentoring the younger ones.

The institution is run by De La Salle Christian Brothers in partnership with other schools and donors around the world. It includes exchange programmes with sister schools, which see students travel around the world for benchmarking.

“I was lucky to be among five students been selected to represent our school in an exchange programme with St Chad’s School in Manchester, UK. I stood out as one of the refined speakers on the topic of the plight of street children in Kenya,” he said.

His speech in Manchester was the reason Mr Gitonga was picked to represent St Mary’s in a ‘meet and thank the donor’ trip in the US that same year.

During the trip to the US, Mr Gitonga spoke to students at Bishop Laughlin Memorial High School and Georgetown University. But it was a trip to Sidwell Friend’s School in Washington DC that stood out.

“One of the donors, Mr Rich McKay was able to organise a trip to Sidwell Friend’s School in DC. Unbeknownst to us, this was the school  that the children of many US dignitaries attend. One of them was Mr Biden’s granddaughter. She loved our speeches and requested him to invite us to his house for dinner,” Mr Gitonga said.

Mr Biden agreed to the request and invited the team to his official residence for dinner with his family.

“Our meeting was supposed to start at 5pm but he arrived a little late. There were mixed feelings when he arrived but what struck me by surprise was how he received us. The first thing he did was apologise for being late. That was a shock to me because this was the vice president of the US. It was surreal,” he narrated.

Together with former principal Brother Dominic, Mr McKay and schoolmate Dennis Mwai, Mr Gitonga proceeded to have dinner with Mr Biden’s family. During the engagement they spoke about their backgrounds and the plight of street children in Kenya.

Mr Gitonga describes Mr Biden as not only humble and hospitable but also a great listener as he spent close to three hours engaging with the team.

“What Mr Biden told me at the end of our meeting changed my life and is the reason I started SOHA. He told me to never forget my roots. This is why I am passionate about reaching out to struggling children and mentoring them,” he told the Nation.

Besides mentoring Mr Gitonga, Mr Biden became actively involved in networking and helping to raise funds for the rescue centre, which still rescues and educates the vulnerable and street children in Nyeri Town and Majengo slum.

Mr Gitonga is unsurprisingly rooting for Mr Biden to win the US presidential elections, saying he is not only a champion of democracy but a symbol of hope to the world.

“Mr Biden is an ideal leader, who will not only help make America great but also better the world. This world needs more leaders like Biden to bring healing. Trust me, Biden will be a perfect leader who will inspire a generation of young people to be the change the world needs. With him at the helm, the future is bright,” he says.