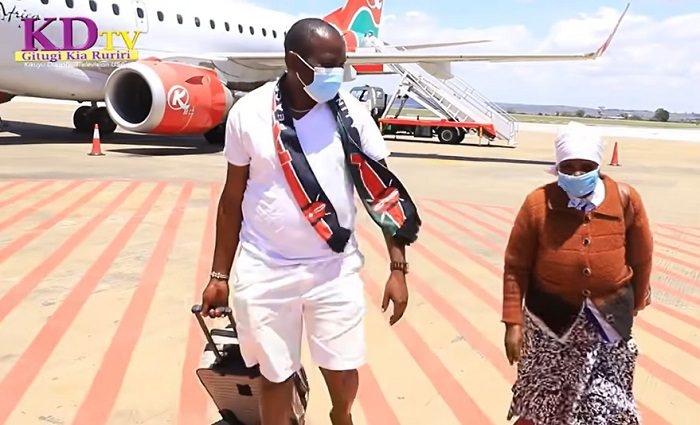 Kenya Diaspora Media TV presenter Jeremy Damaris treated his grandmother to a debut trip aboard an aeroplane – as a gesture of appreciation.

Jeremy, who filmed the nostalgic experience, disclosed that his grandmother was excited and expressed gratitude to God for according her the rare opportunity.

She was also lucky to get the window seat, hence, got an opportunity to see the views of the world below.

On a number of occasions, she would tap the presenter and point towards sceneries and views, possibly asking questions.

Jeremy’s grandmother was not entirely sure that they would disembark and constantly asked when they would get to their destination. She was worried about the poultry she had left home and wondered who would take care of them.

When they arrived at the airport, she prayed, thanking God and blessing her grandson for the experience amid stares from onlookers who did not understand her exhilaration.

The memorable trip came just days after a Ugandan doctor also surprised his guardian with a trip to Nairobi aboard an aeroplane.

Henry Mutebe took to Facebook to narrate how his guardian, Wilson Dhabangi, took up a parental role after he lost his father while his mother was working out of town to make ends meet.

“This man visited me every Sunday for as long as school was open. That’s roughly over 100 Sundays over between 1997-1999. I do not remember any Sunday he did not come to visit me,” Mutebe wrote.

“It did not matter whether it rained or not…whether he was sick or well. He would ride his bicycle and come visit me,” he wrote while appreciating Dhabangi.

A Kenyan/Puerto-Rican Dies in U.S. Chopper crash in Afghanistan