The secretary-general of the Central Organisation of Trade Unions(COTU) Francis Atwoli has traveled to the United Kingdom with his wife Mary Kilobi.

Kilobi, a journalist by profession, shared photos of her and her husband on board a business class flight to the European nation.

Without giving many insights into the trip, the journalist said their trip was “when international duty calls.”

Despite her husband being vocal politically, Kilobi has been reticent from political matters.

The trip comes two days before the inauguration of president-elect William Ruto at Kasarani.

Atwoli was initially opposed to a possible Ruto presidency before changing tune later.

He recently hailed Ruto for having political skills and political smartness to clinch victory in the August 9 general election.

Speaking at a function in Western Kenya on Friday, September 9, the trade unionist said that the outgoing Deputy President outsmarted the Azimio coalition party.

Atwoli said that Azimio team thought that it had won in the presidential polls but God had other plans. 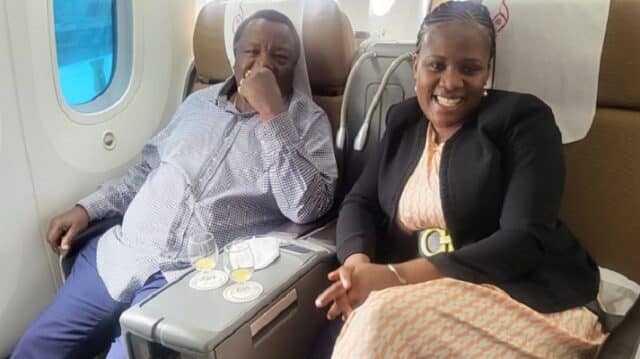 The ardent Raila Odinga supporter further said that the incoming President was now the leader of the country and they have to accept him.

He further maintained that Ruto walked with the Luhya community on his path to power and it was the will of God that he ascended to power.