Kenyans in the diaspora continue to distinguish themselves as a hard-working people who will stop at nothing to advance their dreams and aspirations of establishing businesses and social institutions to serve them away from home.

October 22, 2022 was a great day in the History of the Kenya Christian Fellowship in America (KCFA). It was the day when members of this great organization gathered together in Norlina North Carolina to dedicate the 74.5 acres of land that KCFA purchased 3 years ago in 2019. This land was secured to become the site for building a Kenyan Cultural and Retreat Center that will also serve as KCFA headquarters. 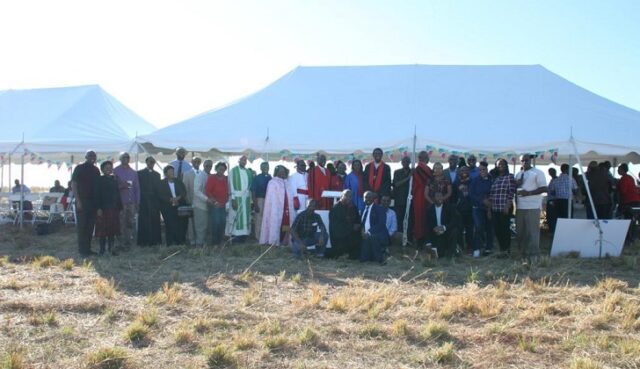 A little history of KCFA show that the organization was established 32 years ago by one Dr. Joseph Karogi who responded to a call from God to bring his countrymen in America together for the common purpose of assisting each other and creating a Kenyan community away from Home.

The philosophy of “Being your brother’s keeper” formed the basis of KCFA’s existance. From a very humble beginning in 1991, KCFA has now active chapters in 29 states including Canada and all of them were represented during the land dedication ceremony.

At the dedication ceremony, it was revealed that the construction plans for the Cultural and Retreat Center have already been approved by the city of Norlina and the next step is to release the architectural and engineering plans.

The construction of the Cultural and Retreat Center is projected to cost a staggering sum of $42 million. The sitting President of KCFA Dr. Joseph Okello announced that he will be mobilizing the National Executive Board (NEB) members to launch an aggressive fund-raising campaign that will include all chapter members and friends to KCFA to raise the needed funds.

At this juncture, Dr. Okello singled out Kenya Airways and Optiven Investment Limited as the two corporate donors that distinguished themselves during the fund-raising towards the purchase of the land.

Dr. Okello promised that he was in the process to roll out a plan that will recruit more corporate donor institution and individuals. It may take some time to raise the needed resources including money but the determination of the men and women from this organization is divine and unstoppable.

The land dedication event was organized to coincide with the Mashujaa day celebrations. During the day, individuals that have done exceptionally well to serve the Kenyan community are honored as community champions.

The Diaspora Messager recognize all these KCFA men and women as community Heroes and heroines and would like to invite all people of repute in Kenya to join KCFA in realizing this dream of flying the Kenyan flag high in America.

We are all proud of our sons and daughters for what they have accomplished and we stand with them for the tasks ahead. Below are more photos: