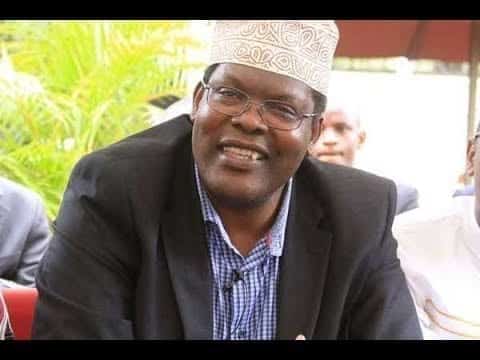 Drama erupted at the royal castle hotel in Mombasa, where former Prime Minister Raila Odinga’s advisor Miguna Miguna held a forum to promote his controversial book, ‘peeling back the mask’. Things however took a different turn when the unexpected happened

Trouble started when Miguna rose to answer questions from the public about his book, Peeling Back the Mask: A Quest for Justice in Kenya.

He was holed up in the hotel for more than four hours yesterday before police finally sneaked him out in a car with civilian registration numbers.

“I have come to promote my book. This gathering should be on discussion on the book. I have not come here to fight anyone,’’ Miguna had earlier said.

Youth stormed the hotel and accused Miguna of being disrespectful to the PM in his book.

Lost left shoe
Sensing danger, security detail formed a human shield around Miguna as they attempted to protect him from the youths who were heckling him.

And earlier attempts by Miguna to leave the premises flopped after the lifts malfunctioned.

This prompted him to use the staircase with his attackers in hot pursuit.

Miguna could not get into his car and had to be taken into the hotel casino, which, too, suffered serious damage after the goons broke glass doors.

The youth roughed up Miguna and removed his ceremonial Islamic white cap. He temporarily lost his left pair of shoe in the melee.

Former Tourism Minister and Mvita MP, Najib Balala, who was present at the function bought the book and left before trouble started for the sacked advisor.