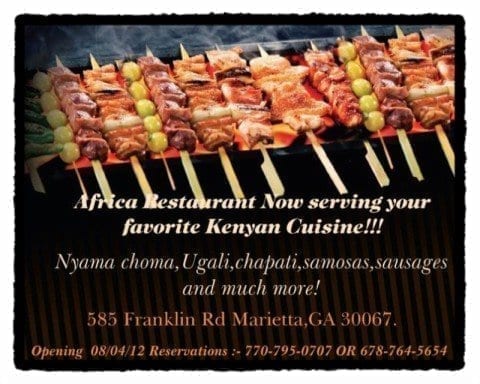 Kenya’s Answer To Barbecue Is Part Celebration, Part Test Of Manhood.In Nairobi, Kenya, when friends want to celebrate a birthday, the end of bachelorhood or a graduation, they often go out for goat. This communal and culinary tradition in Kenya is called nyama choma — literally, roasted meat. While it’s usually goat, some places offer beef, chicken and lamb. If you know where to look, you can even get illegal zebra and and wildebeest meat.

In between assignments covering failed states and marauding rebels, our East Africa Correspondent John Burnett volunteered to investigate nyama choma (which we place in the “tough assignment but somebody’s got to do it” category). Burnett hails from Austin, Texas, or, as he calls it, “the epicenter of the smoking arts.” Now nyama choma is not technically barbecue because it’s not slow-smoked, but it is grilled, so he says, “close enough.”

On a recent lazy Saturday afternoon in Nairobi, Burnett is invited to join three old college chums at the Sagret Hotel’s popular nyama choma place. When they arrive, clusters of friends and families are devouring roast goat at tables all around, and drinking Tusker beer — East Africa’s version of a Bud — with gusto.

The friends choose their fresh kid goat cuts from a refrigerated glass case — hind legs, ribs, and glistening plates of offal. And then “a sweating cook named Mwangi bastes our order of blood sausage and intestines in a tray of salt water, then throws it on the grill over glowing coals,” Burnett reports.

When the cook brings over the charred hors d’oeuvres, Eric Mungai, a computer services entrepreneur, explains the mystique:

“So anytime there’s nyama choma everyone’s happy, I guess it’s like barbecue [but] you don’t barbecue for yourself, you call some friends, family over. It’s not something you do on your own. It’s considered to be a communal thing,” he says.

Nyama choma is also ritual. When a man from the Kikuyu tribe marries, he must use a knife — often dull — to sever the roasted goat shoulder joint cleanly, while everyone watches. That’s why Mburu Karanja, a beer marketer at a nearby table, is here. He’s about to be married, and he needs to practice his knife skills.

“What if you don’t do it in one cut?” asks Burnett.

“It’s unthinkable. The wedding can be called off. It’s actually a test of your manhood,” Karanja replies.

Socializing and meat eating go hand in hand in Kenya. Nyama choma dens are packed on Saturday afternoons. Some men eat so much nyama choma that they’re developing painful gout, Burnett reports. But they see it as a badge of honor.

“Now that we’re living in modern times, people want to have meat as much as they can. It’s something very desirable, but its not that affordable. It is suitably called ‘the rich man’s disease’ [so] it’s not that common,” says Kamau Gachigi, an engineering professor who was sitting at Burnett’s table.

Eventually, the roasted goat legs arrive, and the grillman slices them up quickly and cleanly — skills that would impress any bride’s family.

The eaters roll up balls of ugali, a polenta-like corn mush, and press it next to the nyama choma. Then they dip it in salt and dunk it in a spicy, tomato relish called kachumbari, Burnett says.

“The succulent meat is as good as the best Mexican cabrito I’ve ever tasted,” Burnett says. “Maybe better.”

He was not as thrilled with the blood sausage and guts. “I really wanted to spit the grilled intestines out on the floor,” he tells The Salt, “but I didn’t want to offend my hosts.”

Back at the Sagret Hotel, the schoolmates and their new friend from Texas left the meal and “slouched off into the balmy African afternoon feeling stuffed, satisfied, and connected … in a way that only a fantastic feast can bring about,” Burnett says.

Video:Mrs. Fatou Bensouda, are you a puppet of the West?

Video:Drama in Church as Pastor is accusing of stealing wife