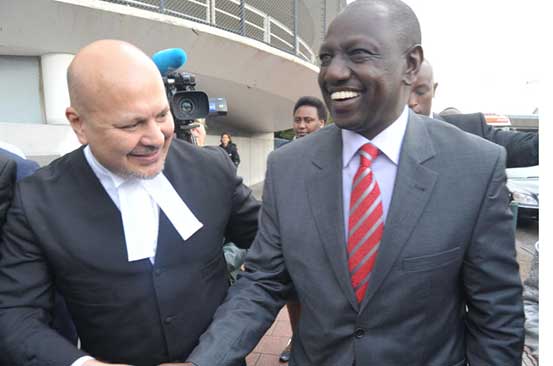 Deputy President William Ruto on Tuesday won a major concession from the International Criminal Court ( ICC), which allowed him to be tried in absentia.

With his ICC trial due to start on September 10, a three-judge bench ruled that Ruto would be required to attend court during key parts of the trial, such as the opening and closing statements, but not throughout as is customary. Ruto and President Uhuru Kenyatta, elected on a joint ticket in March, face charges of orchestrating violence after the previous election five years ago, in which 1,200 people were killed. Both deny the charges.

In a statement on Tuesday, the court said Ruto must be present for the opening and closing statements of all parties and participants, and when victims present their views and concerns in person. He must also attend the delivery of the judgment and, if applicable, the sentencing.

In an appearance before the judges last month, theDeputy President told The Hague-based court to strike a balance between his official responsibilities in Kenya and requirement that the accused must be present throughout the trial.

“The Chamber stressed that permission granted Ruto to not be continuously present was strictly for purposes of accommodating the demanding functions of his office as Deputy Head of State of Kenya and not merely to gratify the dignity of his own occupation of that office,” the judges ruled in a decision published on Tuesday.

Ruto made the request to be tried in absentia shortly after their presidential victory in March 4 General Election arguing that the judges “must balance his responsibility to the court as an individual and his constitutional responsibility as Deputy President.”

“There is no benefit of an individual simply sitting in court. Remember that this is the first time in history when a deputy Head of State has surrendered for justice,” his lead counsel Karim Khan told the judges during a status conference last month.

Ruto and Kenyatta earlier asked the court to allow them to attend their trials via video link. However,ICC Prosecutor Fatou Bensouda and Victims Representative Wilfred Nderitu vehemently opposed the two applications arguing that under the Rome Statute, an accused must be physically present in court during trial.

“If witnesses are presumptively required to travel to the court to testify, no less should be expected of the accused. It is important to ensure justice is not only done, but is seen to be done, particularly given the wide public interest in the case,” Bensouda argued in her opposition.

But in yesterday’s decision, the judges dismissed Ruto’s request to be allowed to attend the trials via video link. However they agreed with the defence argument that they have an obligation to strike a balance that accommodates all interests at stake.

“Those interests include the obligations of accountability for the crimes charged; the interests of the accused, particularly in light of the presumption of his innocence as to those charges until found guilty beyond reasonable doubt; the need to protect victims and witnesses while the charges are being tried; and, the interest of Kenya that now happens to have a man in office as Deputy President,” they said.

In their ruling, the judges issued a stern warning to Ruto that the Rome Statute does not afford any immunity based on official capacity. They said that they retain the judicial control over the accused during the entire proceedings and violations of any of the conditions may result in the revocation of the excusal or the issuance of an arrest warrant.

They said that Ruto in his personal capacity as theDeputy President of Kenya has to take effective actions in good faith to ensure that witnesses and victims are not intimidated. They said he should call on his supporters to refrain from creating any intimidating or harassing atmosphere for these persons involved with the ICC.

It’s not clear, however, when the decision regarding Kenyatta’s request to follow trial proceedings via video link would be rendered since different chambers are handling the two cases. Kenyatta and journalist Joshua Sang however did not apply to the judges to waive their rights to be present at trial.

Sang told the judges at a status conference last month that he would be present throughout his trial. Recently, the three judge bench made a landmark decision and recommended to the ICC Presidency that it may be desirable to hold a portion of the Ruto and Sang cases in Kenya or, alternatively, in Tanzania.

President Uhuru has requested that the Trial Chamber refrains from setting his trial date until the prosecution makes full disclosure of the evidence to be relied upon at trial.