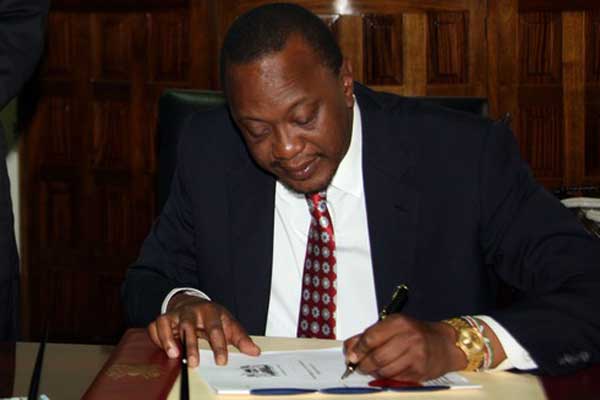 President Kenyatta has named a 10-member taskforce to rationalise the management of parastatals and align them to new Constitution and the Counties.

The members of the taskforce who represent both government and the private sector include: Abdikadir Mohamed (Executive Office of the President), Dr Kamau Thugge (National Treasury) and Mugo Kibati (Vision 2030).

The Taskforce’s Secretariat will comprise members of the State Corporations Advisory Committee (SCAC).

Economic and Political Advisors in the Office of the President and the Inspector-General of Corporations will be ex-officio members.

The team will review the institutional arrangement for the parastatals taking into account the new Constitution, particularly devolution and the role of the Salaries and Remuneration Commission (SRC).

In a dispatch signed by State House Spokesman Manoah Esipisu, the taskforce is expected to deliver its report within six weeks, but in any event not later than September 15.

“President Kenyatta expects that the Taskforce to have a transformational impact in infusing efficiency and innovation in the operations of parastatals,” said Mr Esipisu.-nation.co.ke