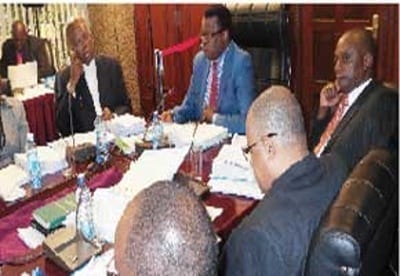 There was an ominous twist to the police vetting exercise when an officer who had said he feared  dying if he was sacked was one of the two fired yesterday. It had sounded like a grim joke when Deputy Commissioner of Police, Eusebius Karuti Laibuta told the National Police Service Commission (NPSC) vetting panel to spare his job, making a grim hint of possible demise if he was kicked out. Laibuta, formerly in-charge of the Administration Police Senior Staff College, had told the vetting panel: “Some of us may have erred here and there, but please consider the service we have given to this country.

This is my personal appeal. If you do not allow us to continue serving, you will find some of us in the obituary pages of the newspapers. If you do not consider our length of service, you are spelling doom for us.” He went on, to the amazement of the quiet panel members: “You may see me in the obituary pages if you retire me. Two hours is not enough to enumerate the good things we have done for this country.” But, the NPSC yesterday apparently confirmed it had not taken the eerie mitigation by Laibuta into considered, as it fired him alongside another Deputy Commissioner of Police Philip Kipchirchir Tuimur, formerly stationed at Vigilance House.

The fate of three others who were vetted, including King’ori Mwangi (Police Headquarters), Peter Musanga Pamba, (Vigilance) and Gideon Muoki Kimilu (CID Headquarters), the commission disclosed, would be known once they undergo further investigations to determine their suitability. “Finally the Commission has analysed the outcome and would like to announce that of the 23 officers in the rank of Deputy Commissioners of Police, 18 were found suitable to continue serving in the National Police Service while two were found unsuitable,” announced NPSC chairman Johnston Kavuludi yesterday.

Kavuludi who chairs the vetting panel said results of the three other officers had not been processed “as the commission needs to conduct further investigations”.  Criterion for suitability “Once these investigations are finalised, the outcome will be made public,” said Kavuludi. Laibuta was sacked alongside Tuimur as, according to Kavuludi, they did not meet the required threshold per the criterion for suitability set by the omission. “The two were found unfit to continue serving in the police force and have therefore been discontinued,” Kavuludi said.

He, however, did not disclose on what specific grounds Laibuta and Tuimur had been dismissed, apparently because the two top cops were yet to be informed. “It would be unfair to the two if we make a public disclosure before informing them,” explained Kavuludi. Yesterday’s verdict came even as the Independent Medico-legal unit (IMLU) called for enhanced security for members of the National Police Service Commission (NPSC) following revelation of death threats to Kavuludi and Commissioner Mohamed Murshid over the vetting exercise of top police officers.

Consequences A hand-written letter that was laced with powder believed to be poisonous and addressed to Kavuludi and Murshid, on Tuesday warned them to go slow in the vetting work or else they would suffer severe consequences. “We condemn the threats and demand guaranteed security for all panelists and NPSC secretariat involved in the police vetting exercise,” IMLU Executive Director Peter Kiama said. “Vetting for all police officers is a key pillar of police reforms and any efforts to frustrate or derail the exercise is malicious, uncalled for and must be resisted at all times,” he added.

During his plea for leniency,  the chair of the commission had sought to re-assure Laibuta that the vetting process would be fair and transparent and not marked by witch-hunt. “This is not witch-hunt and the process will appraise you as an officer and not as a person,” Kavuludi had said. Laibuta had come under fire from the panel for failure to come clear on the sources and mode of acquisition of his wealth. A section of members of the panel had been irked by Laibuta’s failure to answer satisfactorily the question on how many bank accounts he held and how much he earned from each of his business ventures.

Others are Joel Mboya Kitili (Rift Valley), Boniface Maingi (GSU), Rodgers Mbithi (Kenya Police Airwing), Francis Wanjohi (Firearms) and Fred Mwei (AP). Kavuludi disclosed that vetting of another 180 senior police officers is scheduled to start next month. He reiterated that the commission will not cave in to any threats made to him and other members of the vetting panel over the exercise. -By BRIAN NGUGI and MAUREEN NGANGA