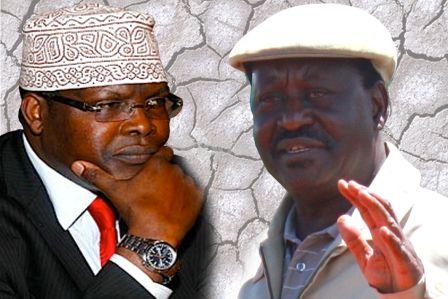 Every man has a right to be angry. For an educated Luo man ditched at the level and manner in which Miguna Miguna was sent packing while serving former Prime Minister Raila Odinga, the pain and disgust of it all will endure forever.

Yet, even at boiling point; Miguna serves himself well by sticking to the facts. He hates Raila Odinga with a passion. He first relished his hatred in his book, peeling back the mask and has continued, whenever he gets an opportunity, verbally or in writing, to make incendiary comments against Odinga.

However, in recent times, Miguna’s epithets on Odinga – cobbled as opinion articles – have taken an absurd turn.

Miguna has extended his hate for Raila to an abhorrence of the larger Raila family; and, sometimes, to Odinga family as a whole. At other times, the whole Luo community has been an object of ridicule from Miguna’s unguided pen.

In two successive articles, Miguna labours aimlessly to convince his audience just how verminous Raila Odinga is. To Miguna, Raila’s magnanimity begins and ends at his household, and, if extended, only covers the Odingas.

In one article titled “Dalmas, Orengo, Kidero should fight for Rights” (Star Wednesday February 12, 2014) Miguna claims, ”Each time ODM is confronted with small democratic tests, challenges or task, its ‘Permanent Supreme Leader,’ Raila Amolo Odinga, resorts to strong arm tactics and intimidation of those he is scared of, especially members of his Luo community”.

In this article, Miguna sees the goings on in ODM, a party with the most diverse representation in Kenya today, as Raila’s doings to first “try and manipulate everyone – the west, the civil society, the media, Luos – name it – into supporting him until he becomes the President of the Republic of Kenya” and, second; to “pave way for his daughter, Rosemary, or son, Fidel, to succeed him either following the ‘successful’ completion of his two terms(s), or upon his inevitable demise, at least to both the Luo and ODM mantles”.

I do not hold brief for Raila Odinga. He’s got highly competent people to do so. Why Miguna Miguna’s line of thought infuriates is because it is clattered by personal vendetta on not only Raila Odinga but also his children – some of whom have remained very private citizens building the nation in other spheres of human endeavours. Again, Miguna’s rantings, at their very best, misrepresents how Luo politics work!

At the demise of Jaramogi, Raila’s father, those who were close to him will tell you Jaramogi ‘preferred’ (Nyatieng’) James Orengo to his own son, Raila Odinga. Even if he had a soft spot for Raila, politically, he did not show it. Raila, taking cue, has never openly ‘introduced’ Fidel or Rosemary in a manner that suggests he wants them to take over, and, even if he were to do it, so what? However, there have been numerous moments when Raila openly introduced and spiritedly campaigned for other people; the best known is the Kibaki Tosha endorsement which reshaped Kenya’s politics for eternity.

Miguna can’t see the log in his own eyes. He scolds Raila for ingeniously ‘paving the way’ for his daughter Rosemary and son Fidel, yet, when he, Miguna, got the earliest opportunity, and a few Jubilee Alliance coins for a ‘job well done’ in peeling back a (non-existent) mask, the first people he flew back to Ontario were his wife, his three daughters Atieno, Anyango, Achieng’ and Sure and son Biko!

Since then, there have been no reports of further ‘airlifts’ from Miguna, yet he discusses other people’s children with a tinge of disdain that makes a mother cringe.

In another poor attempt to contextualise the recent Kisumu anti-Sikh monument riots, (The Star, Thursday February 20, 2014) Miguna again made the same contemptuous comments.

“I have special interest on what transpired in Kisumu last week for numerous reasons. First, because Kisumu is the county where I was born; second, because I have interest in seeing demagoguery, hooliganism and political conmanship extinguished in Luo Nyanza; and third – and more significantly – because some of those mobs that defaced the Sikh statue might be the same ones that burnt my effigy and buried me in a mock funeral at Ahero on July 16, 2012 merely on account that I had written a book their deity, Mr. Raila Amolo Odinga, found disagreeable. Some of them might also have been the ones that attacked and nearly lynched me in Kisumu on August 23rd, 2012″.

To Miguna, rather than assist his horde of admirers to understand the socio-cultural and political “anger” of the Luo over manifest insults – both from Luo elites and outsiders – he stoops lowest to his usual witch-hunt of Raila. In between, an innocent reader is left wondering whether Miguna wanted to defend, as he claims, the rights of the ‘Luo hooligans’ to determine what artistic or religious artefacts are erected in their shared public spaces, or he wanted to continue penning the apparently several missing chapters in his mid life crisis.

Increasingly, it is becoming difficult to put Miguna in his place. Sadly, another chapter in the Kenyan struggle for justice and equitable society may pass with Janyando as just another footnote. Ever since living the employ of Odinga, Miguna has not got a place to stand from which to build Kenya. It seems, ironically, that it was only under Raila that Miguna could collect his true self together to meaningfully do the collective job of nation building. At some point, it looked probable that he would end up in Uhuru government as part of the lucky Luo community “tokens” but this too now seem to be just that – a mirage.

Truth is, Raila is not some deity as Miguna would want us to believe. Odinga is just a smart politician who has mastered his fate. Every man was created to be in charge of his own destiny, and, if possible, other men’s ways. Raila lives knowing he has his role to play in life’s great drama. But MM? He hasn’t adjusted over events which occurred in 2009, yet another election has been held which Miguna’s ‘endorsed’ saviours won, albeit using all means, including unorthodox tactics.

Miguna wants ‘conmanship extinguished in Nyanza’ yet he acts and sounds like a conman himself. How else do you explain a man so short-sighted that he spews empty verbiage after empty verbiage trying to ‘expose’ Raila Odinga but in real sense wallowing in a pathological past that, to a larger extent, is self-afflicted. Miguna only realised ‘conmanship’ existed in Nyanza after being fired. During his days of glory, to even imagine Raila Odinga can be wrong was treasonable.

If Odinga is some deity, then Kenyans have high priests like Miguna Miguna to thank. As he rants aimlessly, Miguna should be reminded that there are Kenyans whose conditions have not changed much because when he was supposed to create Raila Odinga as a democratic institution, he was busy worshipping him, until he got axed.

Turning to Luo and ODM succession politics. As I have said, there is nothing wrong with Raila wanting his children to succeed in life. Miguna too wants his children to be ‘people’ in the future. In fact, if Miguna can beat Raila to that arrangement, the better; but he should not get overly jealous because another man is doing it.

The current President, Uhuru Muigai Kenyatta, owes his rise to Moi and, so it said, his own mother, Mama Ngina. If you sample most parliamentarians, you will find those who got their parents to thank for their current stations in life. What’s so wrong with Raila Odinga doing it? Because he is Raila Odinga? Which law is this that stops parents from moulding their children? Is this law constitutional?

Let Miguna not be cheated; Luos know what is good for them. If it happened that Raila was booed in Kisumu, and at least he rightly pointed out that it was not the first time Tinga was being jeered, then it only proves that Luos do the things they feel sends the messages they want delivered – to whom it may concern – and not necessarily a show of desperation with the status quo as it currently exists in Nyanza.

Never forget, Luos heckled Jomo Kenyatta as early as 1969. So, indeed, heckling isn’t a new phenomenon in Nyanza. Miguna’s attempts to make mountains out of it is therefore, laughable.

But he is right to challenge others ; Dalmas, Kidero, Orengo and any aggrieved Luo politician to take on Raila Odinga. Just crying foul in Nairobi is not enough. Let them come out and roar like lions. There is no virtue in political cowardice.

One more thing; Miguna claims Raila only pledged to erect the statute of his father Jaramogi Oginga Odinga. He again scornfully neglects the fact that it is the rioting mob which demanded the statute of Jaramogi be erected in the same place that those indians erected the monument of that squatting woman.

Mr Miguna, hear me, there is nothing more memorable on Ojijo Koteko, Tom Mboya, Argwings Kodhek, Achieng’ Oneko, Gor Mahia or Lwanda Magere than on Jaramogi Oginga Odinga, as far as Luo politics is, and Kenya’s development ideology is concerned. At least, after 50 years of ‘independence’ we now know that Jaramogi’s ideas on Kenya’s future were more grounded, sound and people uplifting than this current economic neo-colonialism. You know that had your Tom Mboya been more ‘anti-west’ in 1960s, ours would currently not be an economy begging China to build a railway line.

Lwanda Magere? So you are telling that a soldier whose love for the skirt betrayed our warriors in the battlefield with jolang’o (Kipsigis) is more historically important than the doyen of opposition siasa? Omera Miguna wacha upuzi….thank you!