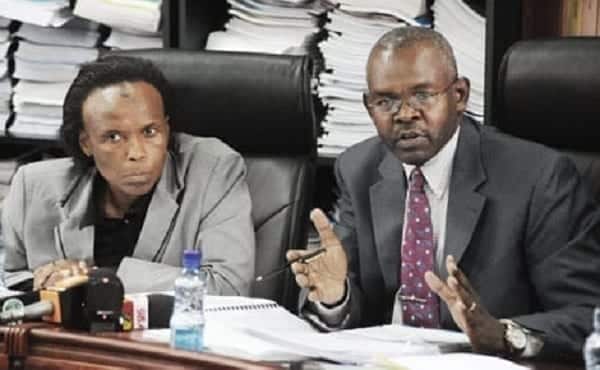 The man at the heart of the Anglo Leasing-linked procurement payments has issued a fresh demand – for Sh 3.05 billion, barely two days after the government paid him Sh1.4 Billion. Siri Lankan businessman Anura Pereira says the payment is for services he rendered to the National Security Intelligence Service, now the NIS.

National Treasury PS Kamau Thugge told the Public Accounts Committee of the National Assembly yesterday that the fresh demands were made against the Flagstaff NCTC project, for a deal entered into in 2004 at a cost of US$41,800,000 for the NSIS.

The PS told the Committee, chaired by Budalang’i MP Ababu Namwamba, that the businessman has already filed the claim against the government of Kenya through the National Treasury, seeking the payments.

Thugge did not explicitly confirm when the latest claim was filed, prompting the committee to order him to furnish it with the letters to this effect. “The demand is not less than Sh3.05 billion entered in 2004. The figure could be more because of the interest rates accrued and the similar tactics that were employed to frustrate the supposed floating of the sovereign bond,” Namwamba remarked.

Suna East MP Junet Mohamed also demanded explanations from the Treasury, asking why Pereira was being favoured. “Doesn’t it look like it is a conspiracy to pay Pereira the claims? Already four of his recent claims under the Anglo Leasing deals have been paid. The one in the pipeline is not even captured in the Pricewaterhouse Coopers report that conducted an evaluation of the other related security projects,” Junet said.

Deputy Solicitor General Muthoni Kimani said that the project was not among the ones evaluated by PWC, based on the nature of its security status. However, Thugge pleaded with the committee to find ways of having the project audited before payments are made, citing high levels of uncertainty concerning how much work was done.

This emerged as the committee was also told that the government is demanding over Sh3.83 billion from Anglo leasing businessman Deepark Kamani in refund over partially-completed contracts.

The Treasury’s quest to recover the money is, however, shrouded in mystery, after claims that the demands had been quashed after the businessman resorted to court action in international jurisdiction.

Meanwhile, Attorney General Githu Muigai has seven days to show cause why a certificate of dishonor should not be issued against him over the Anglo Leasing payouts.

The Law Society of Kenya, Muigai’s professional body, has written to him a show-cause letter alongside Muturi and Kimani. The society says the trio failed to live up to professional expectations in the manner they handled the Anglo Leasing cases. The LSK has never issued a certificate of dishonour and the three risk the dubious distinction of making history.

“We shall appreciate to receive your response within seven days of receipt of this letter. Take notice that in default, the Council will make a determination without any further reference to you,” the letter to Muigai reads.

Yesterday, LSK chair Eric Mutua explained a certificate of dishonor means that Muigai’s peers (all other lawyers) have no confidence in his professional self. It however has no strict legal implications on the AG.

Mutua said the society is an honourable profession which should not tolerate dishonour. He confirmed that certificates of dishonour have never been issued in the Kenyan history.

“The point is one will be looked at in a different light because here are your peers saying they do not trust you. It means a lot in future professional growth, movements and international dealings,” he said.

The society accused Muturi of being an accomplice in issuance of a misleading legal opinion that the government had no option than to pay Anglo Leasing monies. It also accuses him of appearing before a London Court knowing that he did not have a practicing certificate.

“You failed to pursue an available appeal in complete dereliction of the constitution mandate under Article 156 to protect and uphold the rule of law and defend public interest,” Muturi’s letter says.

The letter to Kimani accuses her of directing foreign lawyers representing Kenya to drop defense of bribery and corruption despite overwhelming evidence that to support such line of defense.It further accuses Kimani of abandoning defence and consenting to pay up instead.