Information gathered by the National Intelligence Service will now form part of the evidence against Deputy President William Ruto in his International Criminal Court trial.

ICC has allowed Prosecutor Fatou Bensouda to use all information gathered by the NIS before, during and after the disputed elections in 2007 to prove her case against Ruto.

NIS Director General Michael Gichangi gave the information to the Waki Commission which in turn passed it on to the ICC at The Hague.

Last week the court decided to allow Bensouda to use the spy reports as she seeks to prove the case against Ruto.

Ruto is accused on various counts related to crimes against humanity.

The trial of Ruto and his co-accused Joshua Sang resumes at The Hague today and is schedule to run until July 16.

When Gichangi appeared before the Waki Commission to give his evidence in 2008, he told the commissioners the spy agency he heads was aware that some people had planned to cause violence if their side lost in the Presidential elections.

Gichangi appeared before Justice Waki on July 17, 2008, accompanied by the then agency director in charge of analysis and production, Justus Osoro. They gave public and in-camera evidence which exonerated their institution but incriminated the political class, other security organs and the government generally.

According to Gichangi’s testimony, the NSIS had properly briefed the government on the then impending violence, regardless of who won the election.

His agency had analyzed the situation, held countless security briefings with state officials, drafted various scenarios and recommended various contingency plans for the immediate post-election period, most of which were ignored.

According to NIS, a Kibaki win could lead to spontaneous explosion of ethnic clashes in traditional hotspot areas like Rift Valley and Coast, as well as heightened activity by criminal gangs like Mungiki, Taliban and Kamjesh.

The NIS also factored in the prospect of the opposition resorting to legal redress and possible attempts to form a parallel government, in the event of a disputed outcome. NIS said that they were well aware the combined opposition would incite their supporters in major towns.

On the other hand, a Raila win was likely to lead Kibaki’s die-hard supporters’ rejecting the results, putting the president under siege not to hand over power and ultimately to civil strife.

“Overzealous ODM supporters may engage in celebration-related violence in Nairobi, Luo Nyanza and other major towns,” one classified reports read, adding that a win by Raila would not occasion violence, provided PNU conceded.

According to the NIS briefs to top government leaders and agencies, the security organs would be overwhelmed by possible high-intensity and widespread lawlessness due to an overstretched police force, partisan public service and security personnel.

Other pointers to violence, according to NIS, included cutthroat competition for political office, the unfinished constitutional review business, the majimbo debate, political zoning and idle youths.

The agency testified that during the period leading up to the elections and all year round, it prepared and disseminated security briefs, weekly situation briefs, fortnightly intelligence reports, daily situation reports and hot-spot and flashpoint reports to all relevant agencies and officials.

In one of the NIS security briefs, the Uashin Gishu Intelligence coordinator maintained that there was a common plan to attack PNU supporters in the region and incitement by Kalenjin leaders.

The report, which was not disputed by the defence teams of both Ruto and Sang, also indicated that the bloodshed was pre-planned to get rid of non-Kalenjins in the Rift Valley.

“The Prosecution provides that the compilation contains evidence of a common plan to attack ODM opponents and of incitement by Kalenjin politicians to evict other ethnicities from the area,” the judges said of the dossier.

Minutes of the Bureti District Security Intelligence Committee meeting held on December 10, 2007, indicate that Ruto used inflammatory remarks against other ethnic communities ahead of the presidential polls.

“The Prosecution submits that the document is relevant and probative, since it refers to inflammatory speeches by Ruto,” the ICC document reads in part.

Bensouda has also been allowed to use the Akiwumi Commission of Inquiry into Tribal Clashes Report of 1999 and the Parliamentary Select Committee Report on the Tribal Clashes in Western Kenya and other Areas of 1992 (the Kiliku Report) to prove Ruto-Sang’s criminal intent.

The judges noted the Kiliku Report is relevant as it shows a pattern similar to the alleged organisation of the post-election violence of 2007-08. 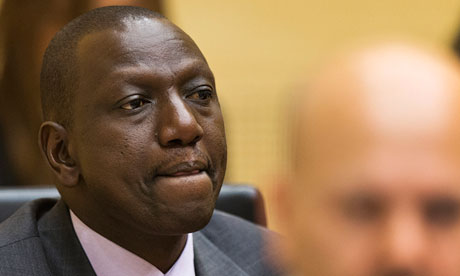 The Historic Signing Of Partnership With The University Of Alabama In Huntsville.

RUNNING IS IN OUR BLOOD: Monica Njeri In Peachtree Race