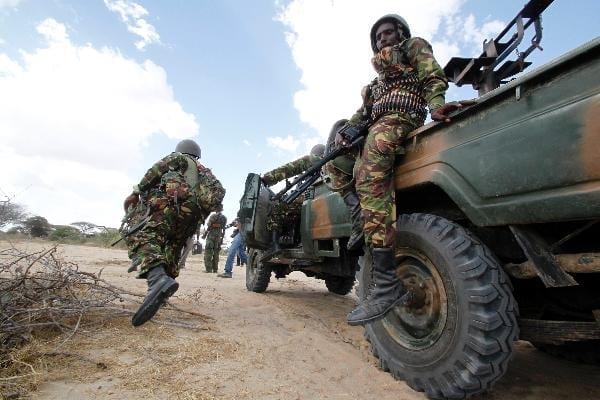 Kenya Navy soldiers were on Wednesday sent to back up a police security operation in the Likoni area of Mombasa, following panic sparked by reports that armed men had been spotted surveying the area.

Parents withdrew their children from schools, while business owners closed their premises.

However, armed police backed by soldiers from the nearby Kenya Navy base patrolled the area, and found a grenade in the Soweto slum where hooded gunmen shot four people dead on Sunday night. The security team later detonated the device.

Likoni OCPD Robert Murithi said police received information regarding the device around 11.20am.

“Police officers on patrol were alerted about the device, which had been sighted near Likoni flats. We rushed to the scene and cordoned-off the area while alerting bomb experts, who on arrival discovered that it was a Russian made hand grenade,” he said, adding, they detonated the object with the help of the Kenya Navy.

Nation Photographer Laban Walloga was roughed up after he took pictures of soldiers on patrol in Likoni.

Mr Murithi dismissed rumours that the gunmen who had attacked Likoni at the weekend had been seen around Soweto area. Earlier, there had been claims that the suspicious armed men camouflaged in buibuis had been seen surveying the locality.

The Nation learnt that learning was paralysed in five schools as headteachers called parents to withdraw their children after the security scare.

“I called police officers, who combed this area, as parents took their children home,” Mr Kevin Nyaga, the headteacher of Bridge International Academy Miami in Soweto, said. The school has 330 students.

“We have many people gathering here and there; I believe that is even causing more tension,” he said.

Parents of other affected schools in the area, including Little Friends, Goodwill and Mweza Primary and Dona Olinda’s Academy, also withdrew their children.

“The headteacher called me to take my child away due to insecurity. I do not know what is happening anymore; it’s very scary,” the father of a Standard Three pupil told the Nation.

Another parent said: “I heard that a nearby school was nearly attacked and that the Sunday gunmen were spotted in the locality. We cannot do anything but pray but I am thinking of moving out.”

Another witness said she got information that hooded gunmen had been seen near Shimoni in Kwale County.

Earlier, residents had claimed that two gunmen had been spotted the area around 8.30am. They said the men had arrived on a motorcycle.

At the Likoni Channel, security officers searched all people boarding the ferry.