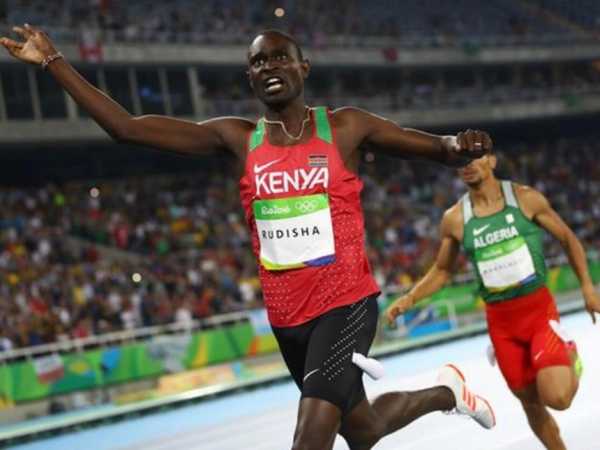 Also in the winners’ list was Commonwealth Games champion Silas Kiplagat in the 1,500m as the duo salvaged some pride for Kenya after a bad day one where Kenya lost in men’s 5,000m and 1,500m races on Friday.

Rudisha was making his first appearance in the United Kingdom since breaking the 800m world record on his way to winning the Olympic gold at London 2012.

The 25-year-old was fresh from winning the New York Diamond League on June 14 in 1:44.63 just after making his return at the Prefontaine Classic, Eugene on May 31 after one year out with an injury.

The victory saw Rudisha lead in the Diamond League Series with eight points in a race where Olivier Andre from South Africa finished second in 1:45.65 followed by Rimmer Michael from Britain in a season best 1:45.89.

Rudisha will be back at the same arena for the Commonwealth Games due July 23 to August 3.

Pay The Price: Victory Comes To Those Who Endure.

Rudisha defends his title and wins second gold medal for…

In the men’s 1500m, Kiplagat stayed behind Moroccan Abdalaati Iguider and the pacesetters – Vincent Kibet and Ruben Bett – up until the last 300m before he claimed the lead.

American Leonel Manzano tried to shake off Kiplagat just before the last bend but the 2009 World 1,500m silver medallist unleashed the kick that carried him to victory in 3:32.84. Iguider finished second in 3:33.20 with Manzano going for a season best of 3:34.40.

It was Kiplagat’s second victory this season after winning in Rome in June.

Just six days after setting a Dutch national record with 3:57.00 in Paris, Sifan Hassan produced another fantastic 1,500m finish to beat Obiri and World champion Abeba Aregawi in a Meeting Record of 4:00.67.

Aregawi, the reigning world champion, indoors and outdoors, couldn’t catch the flying Dutchwoman down the home stretch to settle second in 4:00.94. Obiri finished eighth in 4:05.26.

“It was a good race,” said Hassan, who is now just three points behind Aregawi in the Series, with two races still to go. “The IAAF Diamond League is really important to me because it is great recognition for an athlete.”

Diamond League leader Yenew Alamirew pushed Ethiopia’s Hagos Gebrhiwet to victory in a topsy-turvy 5000m race in 13:11.09, after Kenya’s Augustine Choge had led by some 30 metres early in the race.