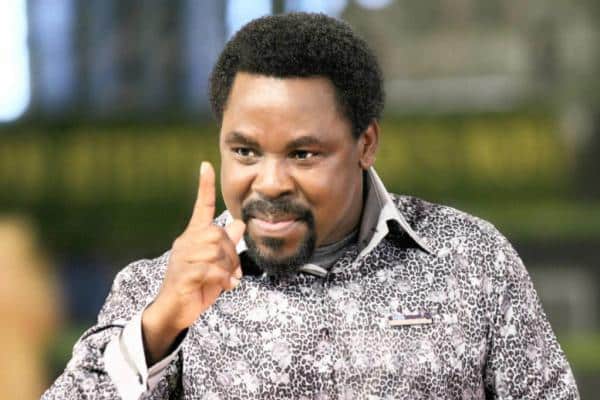 Nigerian pastor TB Joshua has taken some of the relatives of the 85 South Africans killed when a guesthouse collapsed at the Synagogue, Church of All Nations on a shopping spree and showered them with cash.

The controversial pastor extended invitations to 44 relatives of the deceased for Christmas dinner and many accepted. Another group is expected to go to Nigeria this month.

Mpumalanga schoolteacher, Wonder Ndlovu, 47, whose husband, Mbongeni Ndlovu, 52, died in the collapse, was among the first group to spend time with the pastor after the tragedy.

She told the Daily News they had a “nice time” in Nigeria and had been taken shopping – apparently at Joshua’s expense – as well as handed 50 000 Naira (about R3 200), and taken out to the best hotels.

They also visited the site where their loved ones died. “He (Joshua) took us to a five-star posh hotel for dinner, fine food and drinks. The hotel is in Victoria Island,” said Ndlovu.

“After chilling, we came back in his luxurious kombis. (There were) more surprises while (we were) preparing to sleep. The mamas who took us shopping knocked and presented us with 50 000 naira each and they said we (must not) use all our (own) shopping money… I just sang A huna ya tshwana le yena (there’s no one like him),” she said.

UK denies visa-free entry for Commonwealth citizens as a…

On Monday, the group visited the disaster site and Ndlovu said it was an emotional experience. “We met with the man of God (Joshua) and he briefed us about the site visit.

“Wiseman Harry and other evangelists took us there, it was very emotional for me, but others were strong and comforting.

“I brought flowers from South Africa and laid them with my son.” Added Ndlovu: “The prophet is full of surprises. After weeping, he took us to the city to see places. To our surprise we shopped till we dropped and the bill is on him.”

Joshua laid his hands on and prayed for the relatives, a feeling Ndlovu described as a “touch from heaven”.

“We were having the time of our lives, forgetting the pain of the past and looking forward to picking up the pieces and moving on. Yesterday has gone by, but tomorrow is forever.”

Ndlovu said of the disaster site: “It is ugly. Looking at the building foundations, we are convinced it was an attack.”

The Lagos state coroner is carrying out an inquest into the causes of the collapse at a guesthouse within the church’s compound.

Expert witnesses have said the structure was unsound and lacked proper permits but Joshua’s vocal followers have insisted the building came down as a result of foul play, and was a bid to destroy the powerful religious leader.

Among the theories advanced by Joshua loyalists is that a plane flying in the area at the time of the collapse dropped an explosive device on the building.

One weapons expert called by the church’s lawyers, Beidomu Iguniwei, has testified that the collapse could have been caused by an “infrasonic weapon”.

Meanwhile, some of the KZN families who have received invitations to meet Joshua this month said they would gladly go.

Simphiwe Ngcobo, 29, of Durban North, said the trip to the Nigerian capital would help him connect “spiritually” with his parents, Dickie and Dennis Ngcobo.

He said he was excited about the trip and would travel with a relative this month. “It is important for us to go to the site and pay our respects to our loved ones. We have accepted their death and we are moving on.

“We could have gone with the first group of families but we decided to be with the family over Christmas,” he said.

“We have no qualms against anyone, which is why we have gladly accepted this wonderful gesture from the man of God.”

He hopes to meet Joshua and receive spiritual guidance. “We need to overcome what has happened by showing our faith in Christ. We can never reverse our adversity. But with hope in the Lord we can overcome the pain suffered,” he said.

While 74 bodies were flown back to South Africa last month, relatives and friends of the remaining 11 spent the festive season without closure as the forensic identification process was still under way.

Speaking from Nigeria, Kirsten Nematandani, a spokesman for the church based in South Africa, confirmed a second group would visit this month.

He said the “healing” process for the families began last Friday when they had gathered for three hours at the church’s “Prayer Mountain”.

“It is where our prophet’s vision started. When you walk to the sacred mountain, you have to take off your shoes. It is a life-changing experience,” Nematandani said.

“We have been staying at the church premises. The prophet stays here too.”

University Loans Defaulters In Diaspora to be Traced