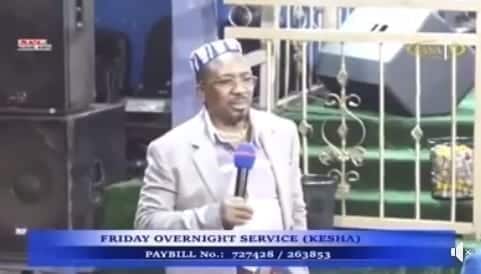 Wrangles At Neno Evangelism As Worshipers Clash With Splinter Group: There were fresh wrangles within Neno evangelism after worshipers from Apostle Ng’ang’as camp caused mayhem to the splinter group at their church in Olkalau.

The group claimed that the land which the church sat in belonged to Neno Evangelism. The entered the church after destroying the fence of the church. They also took music equipment, chairs, tables, and other items onto a waiting truck.

Members of the splinter church got wind of the activities at their church and arrived to the premises to stop the members from taking the property.

The police had to intervene between the two groups, The police also retained the church property until investigations were complete.

The bishop, who was based in Mombasa, launched his new ministry, Shalom Miracle Church, at Tononoka grounds on Sunday.

He had extended invitations to all faithful to attend his new church.

“I wish to welcome you for the school of prayers service this Tuesday at Mombasa Women Hall from 5.30pm. We shall not hold the lunch hours service at the venue, with due respect we have let our brother from Neno Mombasa under the leadership of the servant of God Reverend James Maina to utilise the facility for their lunch service. May God bless you reverend and welcome to Mombasa sir,” Wafula’s post read.

Wafula’s exit came shortly after a six-minute video of Ng’ang’a spewing obscenities and threats to his bishops for allegedly disrespecting his spouse, went viral.

Ng’ang’a, who is not new to controversy, in the undated video, lectured the bishops as his congregants kept mum.

“Nataka kuongea na mabishop wale wako kwa kanisa langu, if you’re not going to respect my wife am going to kick you out of my ministry, even if who you are, ata kama tulitahiriwa na wewe.

Wafula divulged that he felt offended by the insults from the man of God.

“If he had issues with us, he should have called us for a meeting. But declaring in public that he will kick us out means he no longer wants to work with us. I would rather leave than wait for him to do what he threatened,” Wafula said.

Disputing the controversial pastor’s rant, Wafula claimed he has never engaged with Ng’ang’a’s wife beyond their regular church meetings.

Wafula’s exit is said to have left deep divisions in the church, with a section said to be rallying behind him while another supports Ng’ang’a.

The men of clothe were increasingly getting agitated by the many scandals their leader was entangled in. Their night vigils seemed not to change his heart.

“We knew our apostle was in a lot of trouble. We were praying for the devil to let go of him so that he could focus on preaching and be the man of God everyone once respected,” one of Neno followers said.

PRESIDENT OBAMA WILL NOT VISIT K’OGELO