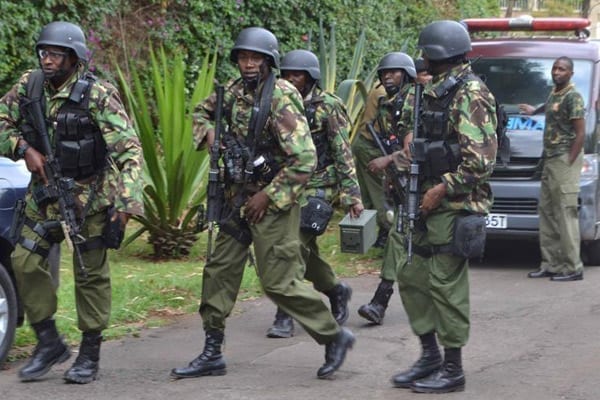 2015: The Elite Recce Company rescue the students held hostage at the Garissa University College killing all the Al-Shabaab militants involved in the attack and are seen in their complete combat equipment that include the M16 assault rifle.

Overview of the M16 Assault Rifle:

The elite Recce Company of the GSU in Kenya being a paramilitary troop are equipped highly equipped with no-expense spared equipment.

The Recce Squadron dons the exquisite and high performance 5.56mm caliber M16 Assault rifle. It is without a doubt the best assault rifle in the military quarters. It is the United States military select-fire adaptation of the AR-15 rifle family.

It has been adapted for both automatic and semi-automatic fire and it fires the 5.56x75mm NATO cartridge. It was first commissioned into America’s jungle warfare but has since been adopted by other militaries globally Kenya included for Elite Squadron Commandos.

It is a relatively averaged sized rifle measuring only 100cm (39.5 inches) with a 50 cm (20inches) long barrel that makes it very mobile.

Compared to the official Kenyan Military service rifle the G3, the rate of fire of M16 is very high as it can fire 45-100 rounds a minute on semi-automatic depending on the shooter and 700-950 rounds per minute on cyclic.

M16 has an effective firing range on a target point of 600metres and 800metre on target area. This translates to a shooter using the M16 can target and shoot a target as far as 600 meters away. Meaning a serviceman or woman can shoot from the herein distance without necessarily being at close quarters with the enemy or target.

The M16 is fed by a either 20-round detachable box magazine or 30-round detachable magazine. Over time they have been adjusted to accommodate a 2.2 kg Beta C-Mag 100 round double lobed drum. The magazines are usually loaded with the 5.56 mm caliber projectiles that have a better penetration that the 7.2 mm NATO Cartridges.

Kemboi rescinds retirement decision-I will only retire with a medal