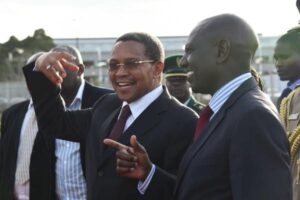 PRESIDENT Uhuru Kenyatta’s diplomatic offensive to reverse the use of prior recorded testimony against Deputy President William Ruto at the ICC has hit a snag.

The Star has established that the committee responsible for coordinating the upcoming Assembly of States Parties meeting, known as The Bureau, has opposed Kenya’s request to have the controversial Rule 68 revisited.

Bureau members pointed out that there is an ongoing judicial process concerning the matter and emphasized there should be a clear separation between judicial and political issues.

ASP President Sidiki Kaba is expected to communicate anytime The Bureau’s decision to the government of Kenya.

“This essentially means that the issue of prior recorded testimony will not be on the agenda of the ASP meeting next month,” sources told the Star.

The move is likely to infuriate the Jubilee team, amid claims by Ruto’s URP brigade that the government machinery has taken its foot off the political and diplomatic accelerators after Uhuru was let off the hook.

At the United Nations General Assembly last week, Uhuru rallied states to help reverse the use of recanted testimony when the Court’s 123 signatory states meet next month.

The weeklong ASP meeting kicks off on November 18.

In August, Kenya sent a protest note to the ASP after the ICC directly admitted into evidence the testimony of five recalcitrant witnesses – a move that has sent shockwaves into the DP’s political inner circle.

Through its Permanent Representative to the United Nations’ Macharia Kamau, Kenya accuses the Court of betrayal and, to a larger extent, also the ASP.

“We wonder why the Court would take this course of action when it is surely aware of the understanding and decisions of the Assembly,” Kamau protested, alluding to claims that the rule was not applicable in the Kenyan cases.

“The legal and moral hazard of such actions ought to be self-evident, as it undermines the legislative oversight of the Assembly.”

The evidence ruling has since triggered anti-ICC rhetoric and prayer rallies.

But amid criticism from the URP team over government commitments to “save” Ruto, Bensouda too is setting up more roadblocks.

In her latest application to the ICC Judges, Bensouda said that Githu cannot claim to represent Ruto and his co-accused Joshua Sang’s interests, since he is not their legal counsel.

“The Rome Statute itself is premised on the ability of the accused themselves, through counsel, to present arguments in their defence and to seek the assistance of the Court in preserving their rights, as may be required,” she stated.

Githu had requested the judges to allow him to participate in the Ruto appeal as a friend of the Court.