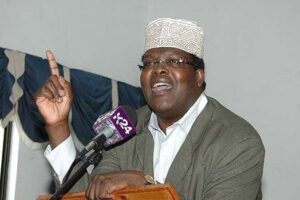 But the gesture was quickly dismissed by a series of jibes from the fiery former adviser of Raila Odinga.

Both Miguna and Sonko have declared their candidature for the Nairobi gubernatorial seat.

The two had two weeks ago clashed during KTN’s talk show JKL Live where Miguna dismissed the flambouyant Senator as illiterate.

On Monday, in a bid to bury the hatchet, Sonko offered a cabinet post to Miguna is elected governor.

Despite Miguna constantly abusing and defaming me. I will appoint him in govt should I win in 2017.

But the olive branch was promptly rejected.

Sonko remained calm and stated that he did not harbor any grudge towards Miguna.

I cannot hate a man who hates me because if I do, what will be the difference between us?

Miguna rose to fame in 2012 after he authored a scathing book, ‘Peeling Back the Mask‘, that exposed corruption and inefficiencies in the former Prime Minister’s office.