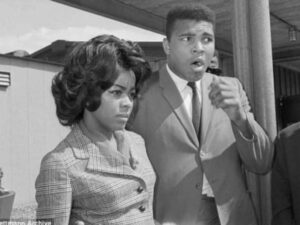 Death has surely come as a merciful release for Muhammad Ali, for it has ended an agonising 30-year struggle with Parkinson’s disease – the one opponent even The Greatest couldn’t beat.

Having spoken to many of his friends and family members, I know that during his last years, each new day was a waking nightmare.

He was trapped in a body so dysfunctional that he needed assistance just to stand up, and could only communicate by grunting.

Ali had become totally dependent on his fourth wife Yolanda – Lonnie – or more usually her sister, Marilyn Williams, who served as his live-in carer during his last years.

The two women would shuttle Ali between his summer house in Louisville, Kentucky, and his winter retreat in the warmer climes of Scottsdale, Arizona, only breaking the routine to fly him to charitable functions and celebrity-studded occasions.

Lonnie insists he never lost his zest for life, though she once alluded to the dark depressions he suffered in this limbo-like state.

Forgotten Kenyan Luminaries who should be in the Kenya Hall…

Throwback: The Day Muhammad Ali Came To Kenya With a Special…

“He has a lot to be depressed about,” she said. ‘The adjustment [to his lifestyle] has been terrific. But I think he has a sense of who he is and his place in history … he still has that sense of self and dignity.”

Perhaps so, yet for all his towering achievements, his mood can hardly have been enhanced by the knowledge that he would leave a family riven by feuds.

They run so deep that it is difficult to imagine how they might come together in the coming days, even for the few hours of his funeral.

The two sides of Muhammad Ali

Ali was a sporting genius but behind the braggadocio, away from the ring, there was another, very different Muhammad Ali.

An Ali whose flaws – among them his susceptibility to sycophancy and weakness for pretty women – wreaked havoc in his personal life, leaving scars so deep they can never be healed.

Married four times, he was a serial adulterer (fortunately for him, such matters weren’t reported openly in his day) and though he acknowledged nine children plus an adopted son, there are many others, all across America, who claim him as their father.

Some have emerged from his train-wreck private life in far better shape than others. Having taken up boxing against his express wishes, his daughter Laila, 37, has become a B-list celebrity.

Some of her sisters have traded on their father’s name to succeed in business. But contrast their fortunes with those of his only – known – natural son, Muhammad Ali Junior, now 43.

Two years ago, I was appalled to find Ali living

with his wife and two infant daughters, in one of Chicago’s most notorious ghettos among drug-dealers and gangsters.

They are still there today, cramped into damp, sparsely furnished tenement flat provided rent-free by Junior’s father-in-law, and surviving on welfare hand-outs and food-stamps. His is a sorry story indeed.

One of the four children born to Ali’s abandoned second wife, Belinda Boyd, ‘Junior’ was woefully neglected by his absentee father as a child, and badly bullied by boys who wanted to prove they could beat up the legendary champion’s son.

Perhaps as a result, he is a pitifully lost and confused character who has spent his life alternately trying to live up to his illustrious name – and making a few dollars from it on the side – and to escape it.

During our meeting, over breakfast at a cheap diner he frequents, Junior recalled how, at his father’s 50th birthday party, Ali took him aside for what would prove to be their only heart-to-heart conversation.

“He told me he was afraid what might happen to him in the afterlife because of some of the things he’s done,” said Junior. “I told him that whatever had gone on in the past, I still loved him, and his eyes filled with tears.”

He was then 21, and says he spent much of the ensuing 20 years trying to rebuild a relationship with his ‘Daddy’.

But he claims to have been thwarted at every turn by Ali’s fourth wife Lonnie, who regarded him – unfairly, he insists – as a sponger and banished him from Ali’s life altogether after learning how he had tried to sell a pair of his father’s boxing gloves.

Though he desperately wanted to say his goodbyes to his father, he says he was kept at arm’s length until Ali drew his last breath. Those who defend Lonnie say her main concern was always to protect her husband.

Whenever he phoned and asked to speak to his father, Junior says, he was told curtly that Ali was sleeping or otherwise engaged.